Growing up an an SM Malls fan – SM is the most ubiquitous mall this side of the planet and for almost ten years I have lived within spitting distance of an SM Supermall – it’s inevitable that it is the one I am most familiar with. Any other mall I go into would pale in comparison and I always find something lacking say, from Robinsons. I would go on a typical rant of “sa SM meron nito, better and cheaper.”
Since my new home is closer to Market Market than any SM mall (until they finally build the SM Hypermart at the Fort) most of my grocery and emergency shopping sprees are done there and among the complaints I have:
It’s only after I did the grocery at SM Hypermart today that I finally saw what SM lacks:
Call me reklamador or what. Or maybe I have adapted to MM since it is now the more convenient place for me? Or maybe SM really is that bad?
One thing that I appreciate at SM though, are their kid-friendly carts. Obviously, MM can’t have this because then, there won’t be any space to walk around in. 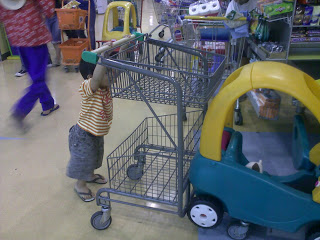 I’m betting my little boy agrees with me.