The town proper being a UNESCO heritage site, museums and historically significant places and things abound in just about every corner of Vigan. You have the San Pablo Museum right behind the VIgan Church, and the Nueva Segovia Museum which is in the Archbishop’s palace just a few steps away; however, both were closed during our trip and we could only look longingly at their locked wooden gates. 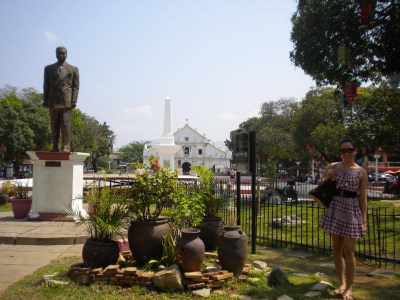 the Burgos Plaza, with the Vigan Church in the background, fountains lit up at night, but unfortunately, it was being repaired that time
The Way They Were
The thing about VIgan is that you can go anywhere on foot. A stone’s throw away from the plaza is the Burgos ancestral house (for Father Burgos of the GOMBURZA martyred priests), which was bought by the Ayalas and donated to a foundation. It was in turn, converted into a museum. 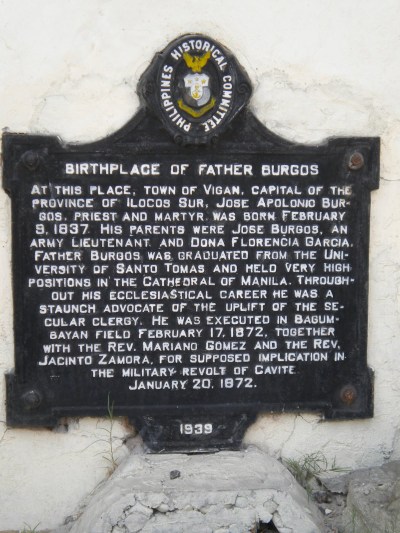 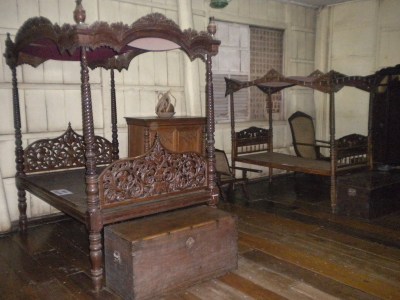 old beds still fill the bedrooms, with the good old arinola sitting under a chair

musty old books which have been painstakingly catalogued and wrapped in plastic by the caretakers
For our next destination, we decided to rent a calesa at a standard rate of Php 150/hr. Now, that’s what I call traipsing through Vigan in style. 🙂 Manong kutsero took us to the Syquia Mansion, birthplace of President Elpidio Quirino’s wife. In case you’re wondering, Gabby’s ex-wife Jenny Syquia belongs to the this clan, as well as Cory Quirino, who is actually the granddaughter of the former president.

This mansion is well taken cared of, there being still descendants of the family. Cory’s brother actually lives in a sectioned-off portion of the house, sometimes mixing with the tourists. Most of the furniture though are hands-off since they are too old to be used. 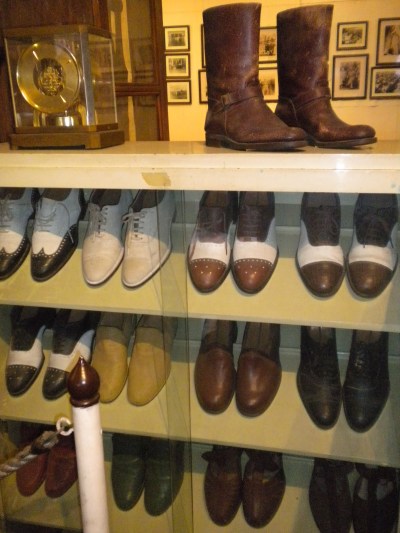 It was actually kind of fun to see the president’s shoe collection, especially when I saw the brogues which are in fashion these days for both men and women.
A street perpendicular to the Syquia Mansion’s location is the Calle Crisologo. Perhaps, this street is the most famous tourist attraction in VIgan, with its cobblestone path and colonial houses, and riding through it in a calesa instantly transports you to the Spanish era.

The place is especially romantic at night, when the street is lighted by incandescent bulbs giving off a golden glow reminiscent of sepia prints found in your lola’s baul. It would have been a good photo-op to dress up as Maria Clara but unfortunately, the old costume rental and photography shop closed and was replaced by a cafe.

Most of the houses along Crisologo are unoccupied except for the ground floors, which house antique and souvenir shops. Some of them also sell bagnet (or crispy fried lechon) and Vigan longganisa. But perhaps the best take home is the Abel Iloko, woven blankets made by the Ilocanos. I managed to buy two queen sized bedsheets, blanket and two sets pillowcases for only Php 1,500! 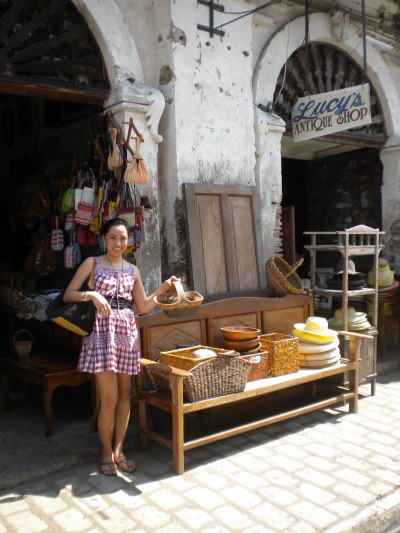 If you have a car, you might also want to buy wood furniture as it is very cheap and the quality is quite good. An acacia console table sells for only Php 1,000 although if you go for the more high-end mahogany, be prepared to shell out some Php 4,000 for the same design.
It’s Not All Cultural
Aside from its obvious cultural riches, Vigan is a province which offers a range of more modern attractions for the weary tourist. Even if you didn’t come prepared with an itinerary, just rent the calesa and the manong kutseros are more than able and willing to tour you around the city. It seems they even have all the sites laid out in their minds. 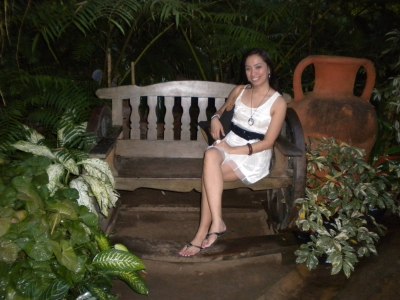 Beyond the city proper, tucked away in a residential barangay, is the Hidden Garden owned by landscape artist Francis Flores. It is a pottery, garden, and cafe all rolled into one and with the different plants in full bloom and the artfully strewn benches and swings, you can just keep clicking away on your camera.

After a quick snack at the garden, our kutsero took us to the Baluarte, owned by Gov. Chavit Singson. It is a sprawling 20-hectare compound with mini-zoo, butterfly garden, pony rides, shooting range, and a free magic show with the zoo animals. Best of all – entrance is free!

The butterflies, though a bit on the common side, are very big compared to those I see here in Manila. I wanted to reach out and grab them by their wings 😛 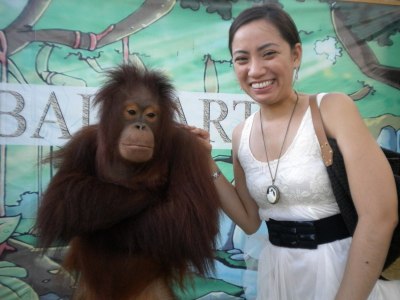 Photos below show me with the monkey and the tiger. Beware the ape as it ransacked my bag in the blink of an eye and before I knew it, it had grabbed my things already!  The tiger, on the other hand, was so tame I wanted to hug it but my fear still held me in check – you never know after all when it might decide it wants you for lunch.
Also a must-see is the Pagburnayan, where you get to see how those terra cotta jars in your garden are made from start to finish. If you want, you can even try your hand at molding!
Jars waiting for their turn in the brick oven: 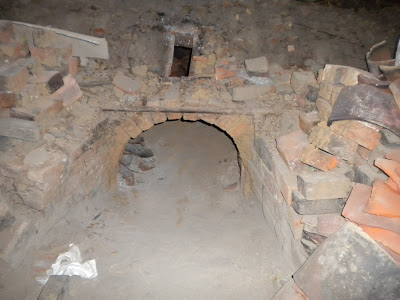 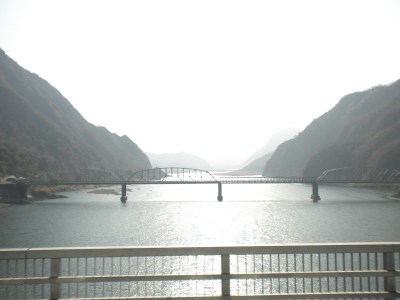 Aside from the city of Vigan, you can also head out to Ilocos Norte, crossing the Ilocos Bridge shown at the right with magnificent views of the ocean by your side. 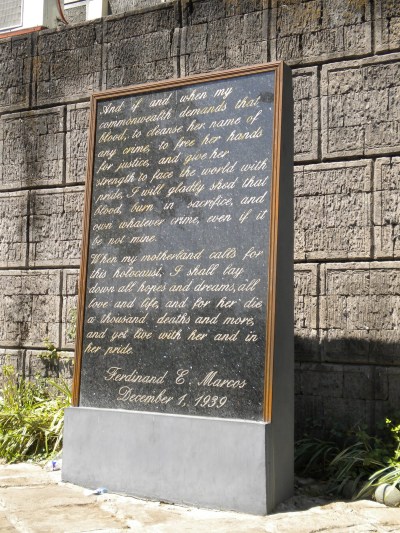 First stop in Ilocos Norte is Batac, where you can find former President Ferdinand Marcos’s refrigerated crypt beside his family’s ancestral home. It’s quite eerie to be inside the crypt, with the dictator’s body in a vacuum-sealed glass coffin looking more like a wax figure. I think it’s because it’s been kept frozen for more than twenty years now that it has lost its human features. Photos inside are not allowed (out of respect for the family or perhaps due to the camera’s flashes contributing to the body’s decay, I am not sure). 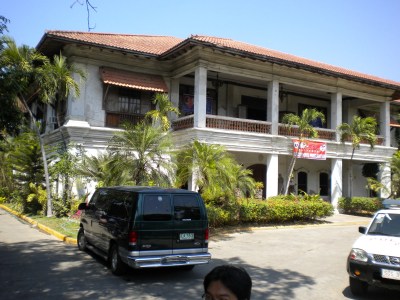 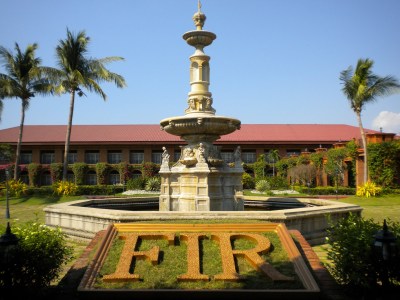 If you’re wondering where to stay in Ilocos Norte, Fort Ilocandia is the answer. It is not only a resort/casino, but a tourist attraction in itself, being the only first-class hotel in the province.

The hotel is also the perfect place to just chill out after touring the province, which is exactly what we did. Their mango cocktail is delicious and so is their halo-halo. Prices are not bad – our tab was only around Php 300.

Up Next: Where to stay and what to eat