Our trip being last minute, I had to make the reservations on the same day we were leaving for Vigan. I had initially wanted to check into Villa Angela or Vigan Plaza Hotel but they were fully booked. In fact, all the hotels were booked!

On our first night, we ended up checking into the Vigan Hotel, a 19th century mansion converted into a hotel (as most of the hotels in the area are). The hotel is a bit shabby though, but at Php 1,675 a night for their suite inclusive of breakfast, you can’t really complain. Plus, it’s right behind the Vigan Church so the location is perfect – you’re in the center but not conspicuously so. 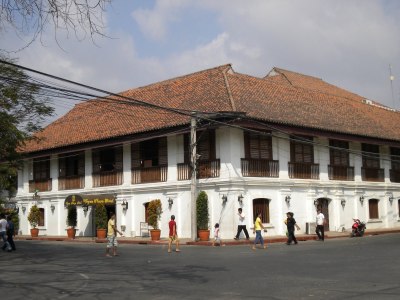 The Vigan Plaza Hotel, which is actually my second choice,  is located right smack in the plaza’s perimeter and just meters away from the Calle Crisologo. It’s probably the best hotel in the area (a no brainer really, as it is owned by Gov. Singson himself) and rates aren’t so bad, with the standard room at only Php 2,300.

Now, I have been wondering why all the hotels were booked considering that Vigan isn’t exactly on top of everybody’s summer destination but when we arrived, we were informed that SIngson’s son was to be married the next day to the incumbent governor’s daughter. Naturally, all sorts of political and showbiz celebrities were there, including President Gloria.

It’s a good thing we arrived a day before the ceremonies, otherwise, we wouldn’t have been able to enjoy Calle Crisologo, which was closed off for the dinner reception.

For our second night, we were finally fortunate to find the Villa Angela available. Now, for those wondering why I was insistent on staying at this old house – it is the most well preserved colonial house I have stepped foot on, probably since it is still owned and run by the same family which built it over a hundred years ago.

The house is just lovely – we stayed at the Casa del Senor or the Master’s Bedroom, in a four-poster bed complete with canopy and curtains. It literally felt like stepping back in time although I almost didn’t want to sleep on the bed for fear it might collapse. Hahaha. 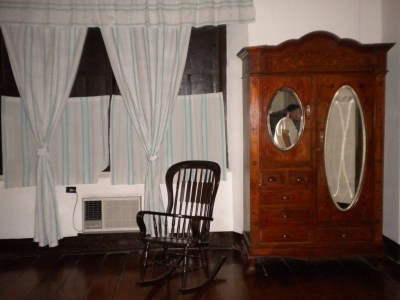 All the other parts of the house are well-maintained; the wooden planks highly polished that you can almost see your face reflected.

Even the appliances were kept!

Now, if all my gushing above is not enough to sway you, consider this: Tom Cruise stayed in the very same house and slept on the very same bed we slept in! He stayed there (I think even Willem Dafoe did) while shooting Born on the Fourth of July in 1989. He may be on the off-side nowadays, but there was a time when most women drool at the very thought of him and I just could not pass up the chance to stay in the same house he did. Shallow, I know.
Photos: Tom Cruise with the owner; dedication from the cast, written on the film’s call sheet; call sheet:

Plus, the rate was only Php 2,000 for an overnight stay inclusive of breakfast for two, consisting of Vigan longanisa and daing na bangus. And the staff were so accommodating I felt like I was the owner of the house.
Transportation

Going to Vigan is a breeze – you can go to any Partas bus station (Cubao and Pasay) anytime as they have buses leaving every hour. When you get there, the best mode of transportation between towns and cities in Ilocos is by bus (sometimes, you’ll have to make do with a non-aircon bus), but in Vigan itself, you’ll have to hoof it, either on your own feet or in a calesa.
Touring the town proper will only take a few hours; in fact, a half-day is okay and you’re good to go. At only Php 150 per hour, our total calesa ride only cost us Php 500! Of course, if you intend to eat or visit museums in between, it might be best to just walk as this will take you more than a half day (if you’re like us – inspecting just about every artifact in the museums). 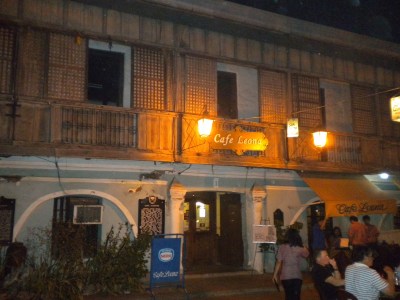 Of course, no vacation will be complete without the food and this is our indulgence in all our travels. My favorite hangout is the Cafe Leona, which is right at the head of Calle Crisologo, Again, it is an old house turned into a restaurant/bar, serving local and other cuisine. I was surprised to find they even offer Japanese and Italian food in this place!
Prices, however, are not for the tight-fisted as each of our meals set us back almost Php 1,000 – but with three dishes, hot chocolate, and fresh fruits, it’s understandable. 🙂

Must order: their pineapple chicken, bagnet and chocolate drink:
I also love the breakfast meals at the Vigan Plaza Hotel, although, I’m quite consistent with my breakfast meals whether traveling here or abroad – I ordered the American breakfast as usual. Haha.

Now, for those on a tight budget, fret not. There are numerous carinderias along the side streets off Crisologo serving delicious native viands such as dinengdeng and bagnet. Price are around Php 40/viand, except for Bagnet which I think is around Php 100 per order.

However, we only dined in the carinderias once, not because I was being a snob, but because it was so hot in Ilocos I was almost melting. I’m not too tolerant of heat and I tend to black out in temperatures over 30 degrees so it wasn’t really an option for me.

Now, Vigan is quite famous for their empanada, which closely resembles a fried lumpia wrapped in empanada bread and then dipped in vinegar and garlic.
I’m not really fond of this dish but at least I got to try the authentic empanada.
For those who want to stay on the safe side – there’s Max’s (which is right smack in Crisologo), McDonald’s, Greenwich, and Jollibee surrounding the town square. Max’s also serves Vigan longanisa and bagnet. 🙂
On our last night, Ipe and I feasted at the Cafe Leona, which I had dubbed my favorite resto in Vigan.

There are still lots of places to visit in Ilocos – Juan Luna’s birthplace, sand dunes, the churches of Bacarra, Sarrat, and Badoc, and the Bangi windmills which are all located in Ilocos Norte. Farther up north is surfer’s paradise – Pagudpud Beach. Also, there are the museums in the Vigan Plaza which we have not been able to visit.
Oh well, I guess this only means we’d be coming back. After all, where else can you find a parking space for calesas in the country?   🙂