Last Sunday, Ipe and I ran into some of our balikbayan relatives (his side) at the Greenbelt Chapel. We were supposed to head to Mesa after hearing Mass so Joey can have his favorite sinigang but got invited to dine in with family instead so we joined them at People’s Palace at Greenbelt 3.
Now, I have been a long GB mall-goer but I usually eat at the restos in the upper floors of the GB3 and in GB5. So I was quite surprised that there was a nice resto waiting for me at the ground floor of GB3.  It opened over three years ago so it’r about time I get to try it. People’s Palace is actually a Thai restaurant but it sort of feels like an Asian fusion restaurant. I have  been looking for an Asian fusion resto ever since I  tried one in Seoul (which, to this day, is one of the best meals I have ever had; probably also the most expensive). 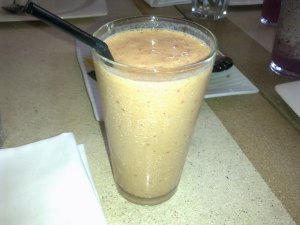 All I can say is – I am really quite wowed by the food. The place is simple enough – just stark whiteness. Even the waiters wore white. Kinda apt, considering that after my first sip of their smoothie, I thought I’d gone to gastronomic heaven.
banana/mango/raspberry yoghurt smoothie
And the plates that kept pouring in just left me wanting for more. First up, we were served the prawn, pomelo and coconut salad. I don’t particularly like pomelo but this one made me think twice – the mix of sweet/sour  succulent pomelos and salty prawns tingled my tastebuds. 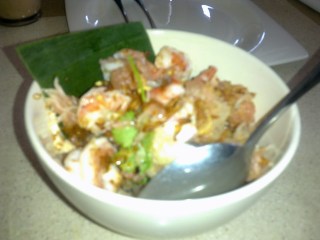 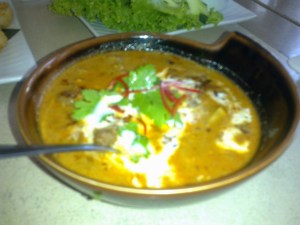 After that, we had the thom kha gai, a spicy coconut/curry soup. It might be a bit too hot for some, but after you get over the initial feeling of having burning soup searing your tongue, you’ll crave for more. I mixed it with my rice to lessen the sting and also since it’s the Pinoy thing to do – mix you soup with rice and then eat with another dish. Plus, did you know that having something with a bit of spice makes the next food you eat taste all the better? 😛
Next was food overdrive, with calamares, sweet and sour fish, and grilled pork liempo served simultaneously These dishes are common enough, but they were cooked very nicely and the fish didn’t have that “fishy” aftertaste that I would be willing enough to try them again next time. 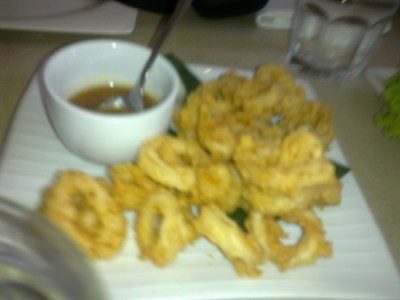 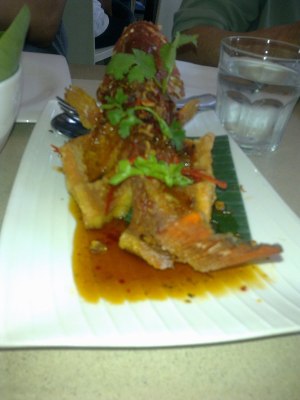 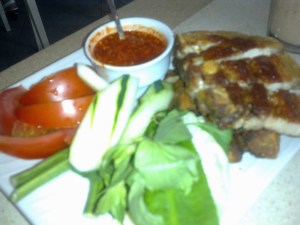 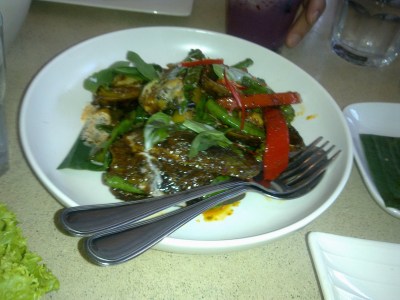 One of my favorites was the spicy mussels. Now, to those of you who’ve been religious followers of my blog, you’d know I’m a sucker for baked mussels and scallops – if a resto serves them, I make it a point to try them. But this one takes the cake. The mussels were so big and juicy, almost two inches long, and so soft they almost melted in my mouth. 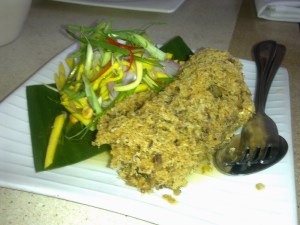 Another must-try here is their shredded catfish with green mango salad. I didn’t even know catfish needed to be shred for it to look really appetizing. The only catfish dish I know is grilled catfish and that is somehow on the lowest end of the spectrum after I looked and tasted this dish.
The list of must-tries doesn’t end there – we also had Vietnamese spring rolls. I particularly enjoyed this dish because it tasted just the way it did in Vietnam. Ever since I’d been there on a business trip more than a year ago, I’ve been on the lookout for authentic Vietnamese cuisine but so far, every place  I tried had been adapted to the Pinoy’s taste buds. And it pleased me no end that they served it with the herbs used in Vietnam too – I almost forgot they were supposed to be eaten together with the rolls until my instinct told me they don’t taste right. I had initially dismissed the leaves on the plate as garnishing. Proof that I enjoyed it so much is I forgot to take pictures of this dish. 😀
As if we weren’t full enough, we still ordered dessert.Loved the sticky rice with mangoes – they were the perfect foil for each other. But I also loved the bananas and ice cream – the bananas were deep fried and soooo soft, another melts-in-your-mouth dish that even Joey enjoyed. 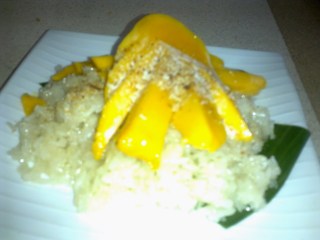 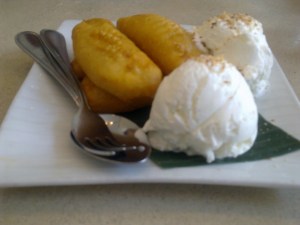 crispy bananas with coconut ice cream
Joey didn’t get to eat much; he was expecting his sinigang but he did down half my smoothie so he’s all happy. Plus he got a chocolate donut after lunch to keep him happy. 🙂 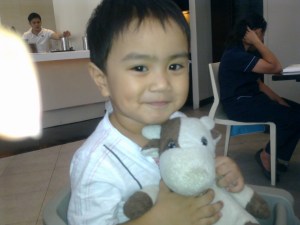 Joey and cow
I loved People’s Palace so much I can’t wait to try what else they have to offer. And prices are relatively pocket-friendly – each dish is around Php 300-Php 400 and I assure you that you will get your money’s worth. 😛