What with all the stress lately, hubby decided to take me for a weekend off in Tagaytay (yeah, loser me works on weekends now) to de-stress. Given though that hubby isn’t good with the planning thing, it was my job to ensure all bookings and reservations are done as I don’t want my me-time ruined by mundane issues. 🙂
I usually dislike driving up to Tagaytay because of the weekend crowd but surprisingly, there was hardly any traffic, even in the city itself, and we were there in less than an hour. But I’d still avoid it on long weekends and holidays – as there is only one major road, all cars pile up.
Number one on the agenda: Lunch! I’ve never been to Antonio’s, partly because a couple of people had warned me of the price and some have told me the food wasn’t worth it; but since they opened the smaller-scale and affordable Antonio’s Grill, I knew I had to go there  first before I decide whether to try Antonio’s itself and find out if all the hype is true.
We ordered the Sinampalukang Manok and Liempo. Now,I have been wanting to cook sinampalukang manok since forever but I can’t find fresh tamarind leaves so I was very eager to try this dish. But, while it was good, I can’t help feeling disappointed – I have a high standard for this dish as I’ve tasted heavenly sinampalukang manok cooked by my papa and it was nowhere near it.
The liempo though, could have tasted a lot better. For a place being run by the same guy who is famed for his grilled food, it was a big disappointment. I found the liempo too oily and fatty, although it was a visual treat.
So what’s my verdict for Antonio’s Grill? Undecided. Since it was our first time here, I want to try it again in the future – they serve Filipino food and there are a lot more I want to try on their menu. Besides, it can’t have gotten its reputation in the first place if it was no good so I think it deserves a chance to redeem itself in my taste buds.
After lunch, we headed to my favorite retreat this side of town – Sonya’s Garden. I promise, I can live there just smelling the garden full of bright flowers in full bloom and herbs and vegetables growing freely everywhere. The place itself is the main draw – if a fairy tale could be bottled in a fragrance, it would have smelled like Sonya’s.  And I love that the garden doesn’t look contrived – it’s like Sonya just threw seeds around, not bothering to think what kind of flowers they are as long as they grow.  And the result is just picture perfect. The fact that the place serves a mean salad and adobo is just a bonus.
Anyway, our agenda for this visit is not the food but to pamper ourselves.

Hubby slept through the entire process while I spent the first half examining the bowl of flowers floating around in rosewater in front of me: 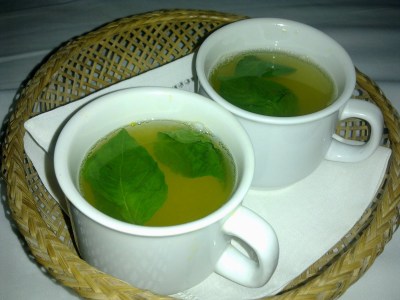 I slept halfway through the massage. 😛 It was very good, and I loved the oil they used (can you guys tell by now that I am enamored by this place?). After the massage, we were served delicious hot tea (I can’t recall the leaves right now though).
It’s only now that I discovered they also sell rosewater spray – I have always been a fan of roses, even as a child and if you’ve been to our house, you’d know it almost always smells like roses. So, naturally, I bought some to take home with me. 🙂
Oh, and on the way back to our room, we stopped to have comfort food for dinner – Pancake House. Now, this place has been by go-to shelter when under a barrage of issues back at my old company and it still brings back those moments. We almost missed it though, as the sign is blasted and could not be seen from the highway. Good thing we were set on eating here (well, this trip was to de-stress and Pancake House reminds me of just that so it was imperative that we eat here).
After that, it was time to snooze off. Or in my case, I ended up curled in bed, reading a good book. We stayed at Jessar Apartments. Now, we have been loyal customers of this apartelle – it’s cheap but doesn’t compromise on service and facilities. The rooms are very clean with a queen sized bed (you can have an additional mattress for extra charge since the room is quite big), have hot water and toiletries, cable TV, free wifi, and free breakfast for two – all for Php 1,600 a night.

A relaxing day which I can’t wait to do again. I’d say, mission accomplished!