Most of you probably remember Joey’s fervent prayer a few weeks back and after visiting the biggest toy store at the mall with no luck, we almost feared his prayer will remain unanswered. Poor little brat though was so patient and understanding when we explained to him that the stores had run out of McQueen cars. Didn’t even cry.
Which made hubby and me reward him with something he had long wanted but never dared to ask (because I told him we didn’t have money to buy): Mac!

It’s actually three times more expensive than what Joey had asked for but he’s been such a good boy we just had to give in.
But as luck would have it (or maybe his little guardian angels led us right to the it) what did we find while looking for water glasses? The elusive blue McQueen! 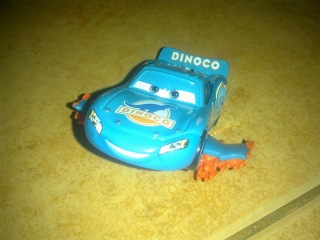