Confession: Macau was and never has been part of my must-see places before I die so I didn’t really prepare for this trip. Armed with no itinerary at all other than what I’ve managed to browse haphazardly on the internet a few minutes before our flight or retained from long conversations with friends who’ve been there, Ipe and I along with two of my close friends from my previous company, boarded the flight.

Ruins and Churches and Casinos

Our first stop was naturally the ruins of St. Paul – arguably the most recognizable symbol of Macau. It was the only remaining part of a church built by the Jesuits when they first settled in Macau in 1565 (though I believe the church itself was built only in 1602), after a fire gutted down the entire complex in 1835.
It presents a great backdrop for photos as it has a great vantage point from the top of a small hill, and can be reached via a steep flight of stairs (if you’re coming from the market/Senado square) and I’ve seen many magazine pictorials done here (in fact, there was a photoshoot that day for a wedding). But I found equally interesting the museum at the back, especially the crypt which contains the bones of the martyrs sent to Japan and Vietnam.
Of to the left of the ruins is the Fortaleza do Monte (Mount Fortress). You can either climb using the steps hewn onto the side of the mountain (a twenty minute trek) or you can head to the museum and take the escalators going all the way up to the Fortress itself. We didn’t discover the museum until we had climbed to the top so we just used it to go down. But perhaps as reward for our little exertion is we discovered a little convenience store where a David Cook-lookalike works as a cashier. I ended up buying mineral water. TWICE. 😛
Anyway, not much to see there except several canons used during the wars. 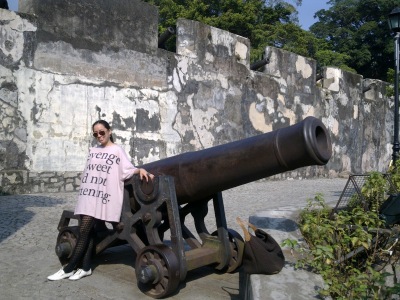 From there, it takes just a five-minute or so walk to get to Senado square, famed for its swirl-patterned pavement and shops. There’s also a Dominican church in the center of the square. Nothing fancy aside from the pavement; the shops are common – Bossini, Giordano, Hang-ten. But we did get to see a free-standing SK-II shop. For those of you who don’t know, this is a premium beauty product of P&G, manufactured in Japan and patronized by beauty junkies the world over. Except that it’s not sold in the Philippines – prices are a bit steep (though it’s cheaper than La Mer which is sold at Rustan’s).

You can pretty much walk your way around Macau – your first stop should be the ruins, square, fortress. Then, when the sun starts to set, take a cab to the casinos – Sands, Grand Lisboa, Wynn. The lights are sure to amaze you – especially the five-minute long pyro musical at the Wynn’s fountain area at night. There are no entrance fees and the taxi fare is quite cheap (unlike here).

Cameras are not allowed inside the casinos though, and I didn’t dare break the rules when I am not in my home country. 😛
Up next: Macau: Day 2 Venetian Hotel