On our last day, we checked in at one of the newest hotels to open in Macau – the Venetian Hotel. 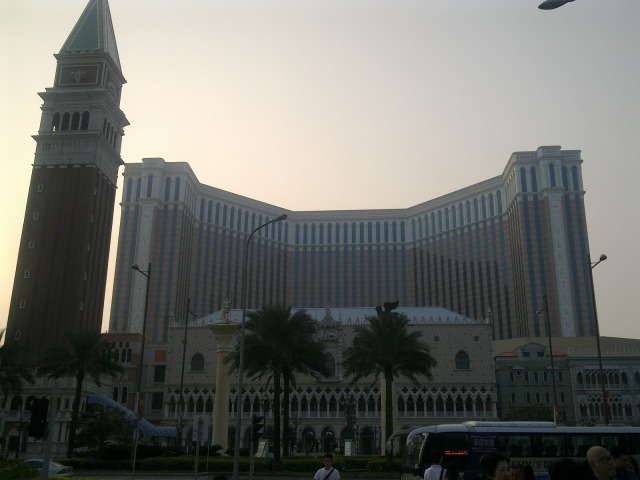 Everything about this hotel screams opulence – from the ornate designs of the cornices, the high, domed-ceiling, the lobbies, the shops, and of course, the rooms. The hotel has many wings and each wing has its own bank of elevators – these are adorned with paintings and intricate chandeliers and tiled floors.
We checked into the Bella Suite, which comes with two double beds, a living room/study, and a walk-in closet:

Now, I’m very particular with bathrooms but this one is the most beautiful I have ever been in. It has a tub, a shower, a spacious power area with vanity table for all your post-shower beauty rituals and touch-ups, and a small, unobtrusive door opens to reveal the comfort room.

View from our room during the day:
Right after checking in, our grumbling stomachs led us to the hotel’s foodcourt. While the Venetian does have a fine-dining cafe and nice restos, there was an event that night so we just settled for the food court, which was cheaper anyway than eating at the cafe. Plus, the ambiance was just so nice, with the dining area made to look like the sidewalks of a European city, and the ceiling a perpetual mix of twilight colors. Yes, my dears, that “sky” is not real, but a well-painted and well-lit ceiling. It does lend for a very romantic setting, don’t you think?

The atrium connecting the casino to the mall. The shops in this particular area consists of high-end designer names, notably jewelry stores – after all, what better way to spend your winnings than splurging in some bling? Tiffany’s occupies a very nice spot, fronting the top of the escalators from the casinos. 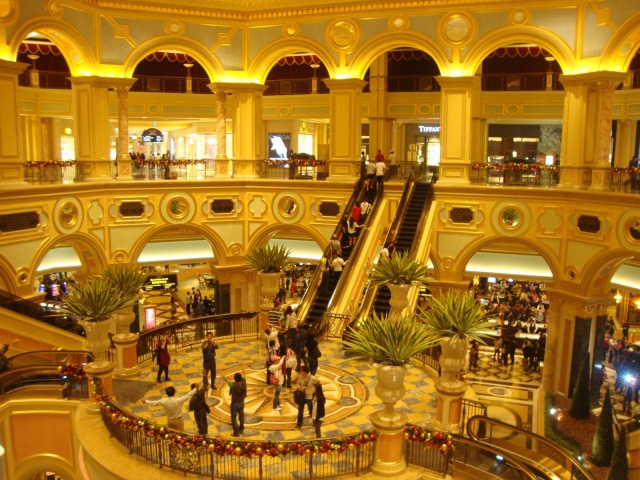 But that’s not all. While there are a lot of shops both at the Venetian and at the Four Seasons Hotel next door (the shopping complexes are connected by an unnoticeable walkway; we only noticed it because of the vague change in decor), the hotel still has a lot to offer:
One of the gondoliers was a good looking young man and everyone was having their pictures taken, so of course, I gotta have mine taken too (another weird quirk of mine – I don’t like approaching famous people to have photos with them, but I wouldn’t think twice about posing next to a total stranger. ha!).
There is a Cirque du Soleil show at the Venetian but we decided not to watch it, but I would recommend it if you do get to stay there. And we found out the Asian Music Awards was being held that same night, hence the pandemonium caused by screaming teenagers rooting for their favorite Korean stars. Indeed, we were almost caught unaware that we were standing right outside the concert hall’s massive doors until the audience started streaming out. Luckily, a Pinoy bellboy was kind enough to explain to us and tell us who the Asian stars present were – and if you remember Sandara Park, yeah, she was there.
Walking for hours certainly made Ipe and myself ravenous, so we treated ourselves to our favorite dessert: banana split, at Haagen Dazs. Freezing weather be damned! 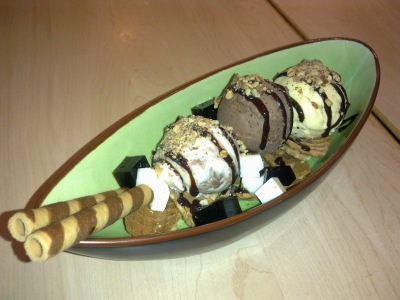 While we didn’t make it to the pool since it closes, I think, at around 9PM and we woke up too late the next morning (in fact, the pool was closed since there was a shoot going on), we did manage to have pictures as soon as we got dressed.
Venetian Macau, outside, at night: 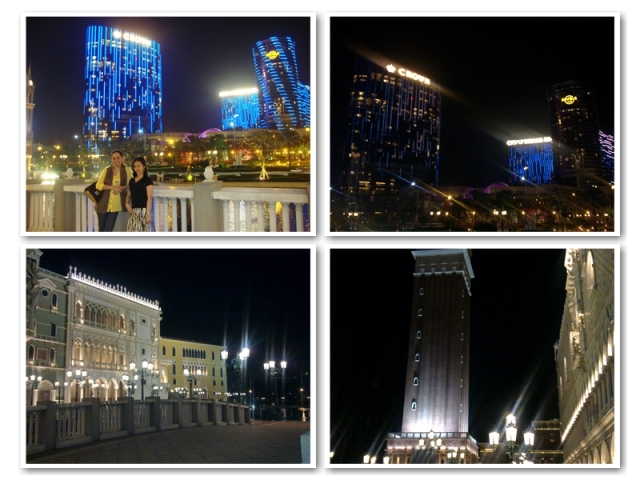 Food at the Venetian Macau food court is very tasty and they have different cuisine: Thai, Vietnamese, American, Japanese, Italian (but, of course!). The prices though, are not your regular food court range – each meal set us back around an equivalent of Php 500 each. And that wasn’t even splurging. But I would recommend the burgers at the gourmet place (my bad, I forgot the name) right at the entrance to the food court – so good!

Of course, Ipe and I had to have our souvenir shot: 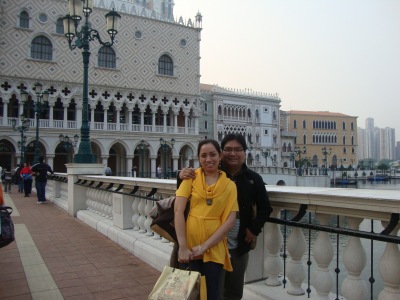 I suggest that you block an entire day, or two, just to explore the Venetian. We already used up an entire day and we didn’t get to use the pool, or watch the shows, or try the casino (ok fine, we tried the slot machines and won 40 cents out of the $20 we gambled off). It’s reputedly the biggest building in the whole of Asia, and, according to one website, it surpasses, together with the Wynn and Sands casinos, the Vegas strip as the world’s most lucrative gambling spots. How’s that! And they say Asians are poor.
* Next stop: conquering the rest of Macau