While I have been pretty vocal about my love for Bohol, I cannot deny the captivating beauty of Boracay’s mile-long white beach. I do not make a yearly pilgrimage to this island (I blame it on our often conflicting schedules – it’s just so freaking hard to find a good window to travel between a journalist and an accountant), but this place holds a special place in my heart, being one of the first destinations Ipe and I visited shortly after we got married.
Anyway, I didn’t really plan much for this trip – it was short: 3D/2N and since we arrived late on the 1st day (blame it on the air traffic – we got on the plane at 2:15pm but left the tarmac at 430pm) and left early the 3rd day, you could say we actually just stayed for a little over a day. Besides, as hubby told me while I was busy googling: we only wanted to lounge on the beach, eat and catch up on sleep.
But of course, I had to take care of some logistics: airport transfers, accommodation, what to do. We already had plane tickets and since I didn’t want to be inconvenienced by lugging around our bags and riding the tricycle (tamad ako eh), I booked round-trip airport transfers at Php900 each via this really cool website where you can plan everything – from plane rides, transfers, accommodation, food, and activities. Even chopper or motorboat rides!
The best thing is, they have a map of the entire island, showing you the different beaches (white beach, Diniwid Beach, etc) as well as the hotels/apartments. Note though that this is not an exhaustive list; there are others not reflected on their map but I would assume it covers about 98%-99% of the establishments in Boracay. Plus, they have operators available via online chat. How convenient is that? Oh, and to make things even lovelier, they accept credit card payments – and they only charge 15% of your hotel bill while the balance can be paid onsite.
My main concern was, where do we stay? Hubby had given me somewhat explicit but vague instructions: cheap but comfortable (I was looking to splurge at the Shang but he squashed the idea). I spent many hours poring over their hotel listing and comparing it across various travel websites and forums (Tripadvisor, Asiatravel, AsiaRooms) to make sure I was getting the best deal. I initially looked at the Php2,000 range because of hubby’s instruction but I couldn’t find anything decent, until I reached the Php4,000-Php5,000 range. It was a tossup between Boracay Garden Resort and Mango Ray – both had big rooms, breakfast and the only other consideration was the former had a large pool while the latter had a jacuzzi in their suite. Now, having a pretty decent pool at home, it didn’t impress us much; but after going through the photos online and seeing green monoblock chairs all over the Boracay Garden Resort, we immediately nixed it. Nothing screams cheap more than monoblocks. So Mango Ray won.
So with all our transportation and accommodation worries laid to rest, all we needed to do was hop on the plane.
Mango Ray
Our choice was immediately proven perfect upon arrival – it was right on Station 2, with its own beachfront dotted with red beach umbrellas shading native lounge chairs. Our suite had its own set of stairs, its own balcony (which was big enough to be an actual room) and was huge! While the complex was a bit old and definitely not five star, it was quite charming. And how can I argue when it only set me back Php4,500/night to get a suite with its own balcony and jacuzzi?
We didn’t try their food though, other than the free breakfast, so I cannot judge. But if I were to base on their breakfast – it was just average. Not bad, but nothing to rave about.
The only other downside was the internet connection. Wifi was supposedly available for free and while they did give us the password, I was never able to connect, either using my laptop or my phone. But then, I didn’t really need Wifi right? When the beach is right in front of you, would you really choose to just stay indoors?

Beachbums
Like I said, we didn’t plan much – we just wanted to swim and hang out on the beach. And eat. The only activity we had was helmet diving, which set us back by Php500 each – and it comes with a free CD containing your underground photos and a short video of you feeding the fish.
While it was fun being able to stand on the seabed and breathe normally, I didn’t find anything spectacular under the water – there were lots of fish and corals but none as colorful as in Balicasag Island, where we were also literally covered by schools of colorful fish and everywhere you look you can see bright corals. But I still give Boracay a two-thumbs up. 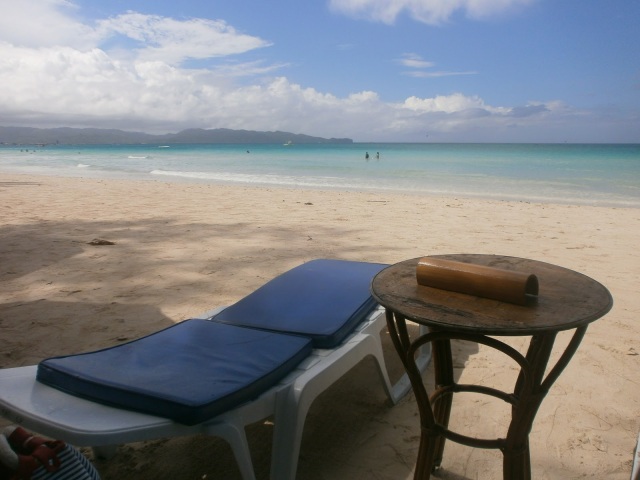 After that, we just spent the entire day sitting on the beach, swimming, drinking frappuccinos and reading. I tried to get a decent shot of the sunset but there was guy blocking my view and I was too lazy to get up. Oh well. 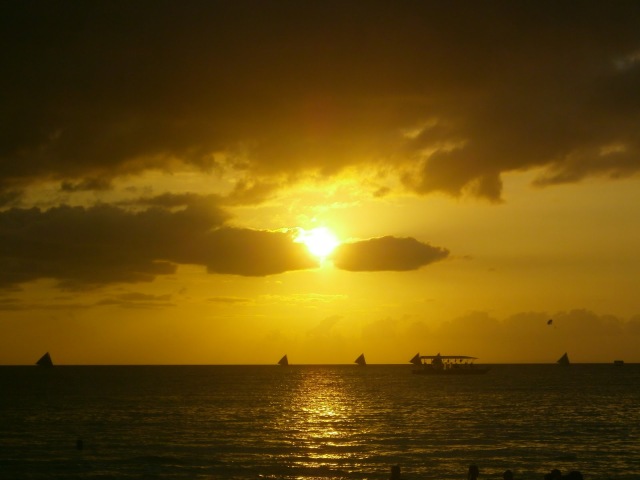 You can’t go hungry in Boracay – there’s food for everyone – seafood, meats, veggies and for whatever budget. Our first night, we opted to get a buffet for Php299 – this includes a glass of soft drink or a bottle of water (if you can convince them) plus unlimited grilled seafood (including shells, etc). I was like — seriously? I could have stayed forever, risking high blood and all.
On our next night, we tried the set meal at the Boracay Regency, which was a steal at Php230. You get five kebab sticks of your choice – shrimps, fish, pork, chicken, whatever you want! Plus four pieces of grilled clams, a glass of iced tea and yummy dessert. It wasn’t buffet but really, how many kebabs can you eat in one night? And they were generous sticks at that. 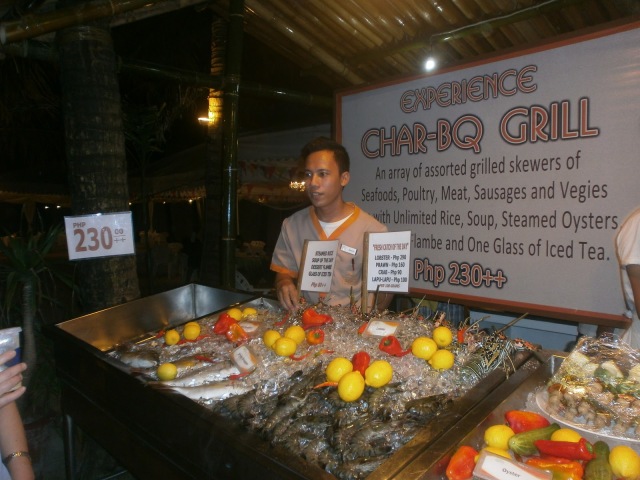 Plus, they have a live band every night and their own elegant tent set-up on the beach.
If you aren’t keen on having the buffet, there are plenty of other options – either on the beach or at D Mall. There are Spanish/Greek/Mexican/Korean/Japanese restos practically side by side.

Took a little stroll after dinner to burn the calories:

Shopping
Wait. Shopping??? On an island as small as this one? Yes, Boracay has its very own mall – D’Mall. Well, you all know about it. D Mall has steadily improved over the years, adding new shops, restos, service centers (airline offices, banks, spas, photo/video). Would you believe there is now even an antique shop (was it there before?)??? If only carrying antique furniture with us wouldn’t be such a hassle (not to mention expensive), I’m sure the hubby would have walked away with an antique religious statue or two. I did also hold off on buying pearl jewelry – I have this habit of buying them whenever I go to the beach, but I’m not really a pearl person (I like having just one or two on me, but not really an entire set; i like my bling sparkly and pearls don’t fit this requirements, unless they’re set in gold with diamonds, hehe) so I just end up hoarding them.
The Damage to my Pocket
Well, let’s see.
Hotel – Php9,000 for a suite
Airfare – this would vary, depending on your airline and when you booked (sale or regular priced? Peak or off peak) so I can’t estimate
Transfers – Php1,800
Food – Dinner – Php299 x 2 persons x 2 nights = Php1,196
Lunch – we didn’t really eat lunch – haha, we just had Starbucks = Php330
Helmet Diving – Php1,000
That would be a grand total of around Php13,500 for the two of us.
Not bad, eh? Considering we didn’t scrimp. You can even cut on the transfers — just take the tricycle from the airport to the jetty port, take the boat (I think it’s only Php20?) and you can easily save Php1,500 per head. Oh, and there are lots of cheaper food options. And cheaper accommodations too. Just saying.
Oh, and I forgot to mention that I got these reusable underwater film cameras at Market Market for Php695 and it was a buy one take one deal! But since its a film camera, I have yet to have the photos saved in a CD. So, my underwater shots for this post are limited.
I can’t wait to go back, hopefully next month. And I plan on parasailing this time. 🙂