This year perhaps marks the first time that our annual Varsi Amihan Christmas party did not involve overnight. And it probably takes 2nd place as the most spur of the moment parties we’ve had in the ten years we’ve been doing this (guilty on both counts). Planning this annual event somehow landed on my lap but I was just not feeling Christmassy this year and throwing a party was not one of my priorities (not that I don’t want to meet up with my Varsi friends – I do, and if I could, I would hang out with them everyday).
Anyway, good thing Feli came to the rescue and organized it with less than a week to go. Since we sent out the invites rather late, it also meant we had to think of a venue that was more or less never occupied. And so we ended up at Gloria Maris, Araneta. Seriously, the place serves decent enough food but any given time that we’re in Cubao, it’s almost always empty.
Second party this week that I’m late. They were all done with dinner and about to transfer to the next venue when I arrived. But thanks to Leah and Marisse for arriving even later, we ended up staying at Gloria Maris til they closed. Though of course, Leah just arrived from Singapore so she was excused for being late. Haha.
We usually have coffee and dessert at Gloria Jeans (ok, too many Glorias there and I find it too funny) but it closes early; hence, the Starbucks. 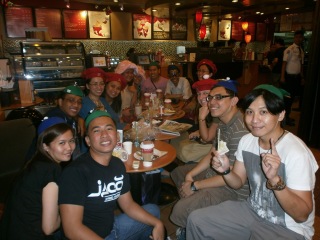 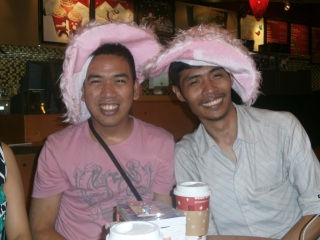 Of course, what party would be complete without…drumroll please! Raffle prizes! Yey! Ok, to give you a background, we don’t really spend for these raffle prizes. We just pool all the gifts we don’t want to keep or have no use for and raffle them off. Kind of like a swap thingie, except it’s more fun. Our grand prize this year is a two burner stove and a foot spa machine (which hubby won at his office party, haha). And left-over GCs. 😛

In keeping with the somber atmosphere this season, what with the terrible Sendong hitting CDO and Iligan, we unanimously agreed to forego exchanging gifts and just donate money to charity. What do you know? We raised almost Php10K (courtesy of a very generous S$100 from Leah, clap clap)! Yehey! I think we’ll be donating it to Iligan, which was hit quite as hard as CDO but is not getting nearly as much help.
Merry Christmas my dear Varsi friends! Entering our second decade of friendship!