I took the day off last Friday to do some mommy duties – attend Joey’s oral interpretation contest. I missed Joey’s first field trip a few weeks before so I didn’t really want to miss this one. 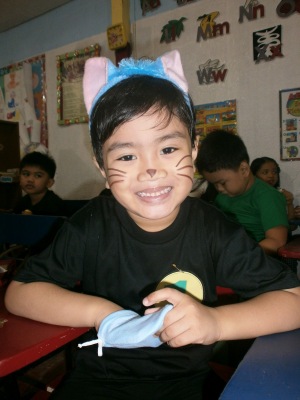 Joey had to recite The Three Little Kittens so we got him a black shirt and leggings (but don’t tell Joey we got it from the girls’ section) and some blue mittens which he loved so much and wouldn’t take off. Funny how when he was a baby, he never wore mittens – he’d shrug them off, even when he was an hours-old baby. I had wanted to get him some really nice cat costume but we couldn’t find one so I just settled for drawing some whiskers on his face.
I think the make up turned out okay, given that I hardly even know how to put make up on myself. 😛
Anyway, I was quite shocked to find out that he had to recite two poems (his school diary indicated only one, and we were given only the copy of The Three Little Kittens) but turns out Joey knew the 2nd poem even better. He fumbled one line of the first poem (I think he got distracted with wringing off the mittens) but got through clear on the other lines and the 2nd poem.
So no, he didn’t win. And I am whacking my head for not getting that leopard costume (some of his classmates showed up as leopards and one even won). Should have gotten him that costume. The little boybie was so sad he didn’t get a shiny medal but what can I do? He really did fumble one line, although I can’t blame him, especially since he must have been feeling sick already (he was burning with 38.6 fever when we got home) and had been absent for a total of five days the past two weeks leading up to the contest.
And besides, I never won a medal for performing back in my student days (except as part of my class or as a group), so maybe he took after me. 😀