I was torn between dreading and anticipating Joey’s graduation. Mind you, he’s only in nursery (or was, since it’s already vacation) so it shouldn’t have been a big deal (especially for me, since I dropped out of prep school). I’m not really competitive – I believe in competing with yourself but of course, if I have to choose, then I would naturally choose to land on top, right? I wanted the same for Joey.
So imagine our happiness when hubby and I got home and saw his graduation program waiting for us on our dining table and right there in the academic excellence awards portion was our kiddo’s name (and my dismay that the graduation was at 2PM – which meant it would start at 3 and I had already planned on joining our teambuilding)! I was half-expecting it, since I think I only saw ONE test paper returned with a less than 100 mark the entire year. Imagine?!? I suppose he could have been first if not for his absences; if my count is right, he’d been absent for more than a month. Yeah, allow me to gloat – I’m a proud mom after all.
Me: Joey, you’re second!
Joey: Mom, second is better than first because two is greater than one. (never mind that there’s a third honor, haha) 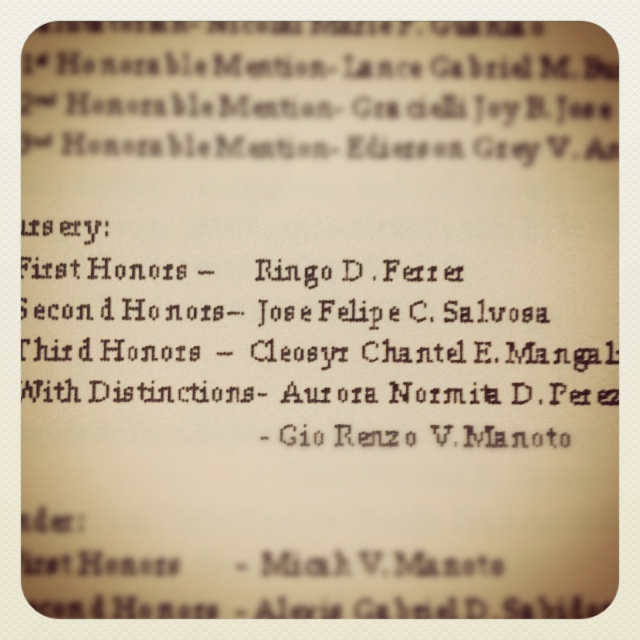 Joey also had a dance presentation for the program and since hubby and I suddenly found our Saturday morning free, we decided to take his costume up a notch by buying a fresh garland. Which ended up costing more than his actual Hawaiian costume. On a side note, I love flowers – in fact, my uber-hyper (emphasis mine) sensitive olfactory senses can only tolerate light floral scents (fruity ones make me sneeze BIG TIME). I was almost giddy just looking at the shops at Market Market.

Anyway, the boybie put up a big fight regarding the garland. In fact, when he learned hubby and I were going to Market to buy flowers, he was adamant that he won’t be wearing them. Good thing some of his male classmates had garlands too (the plastic one, so Joey’s still the best in costume for me, ha!) and he wanted to wear them after all. Talk about peer pressure. Hahaha.

The program was quite long – I think the school gave out special awards to practically everyone so as not to offend them (I would have preferred that they didn’t – it just gave the kids a sense of entitlement that they will always be rewarded no matter what, and real life isn’t like that). Plus, there were too many intermission numbers for my taste. In short, it took longer than necessary and I was developing a migraine sitting there in 35º C heat.
And Joey was beginning to throw a tantrum since they called out all the special awards first before the academic ones. In an anti-climactic move, they called out the awards in descending order, rather than the opposite. Hahaha. 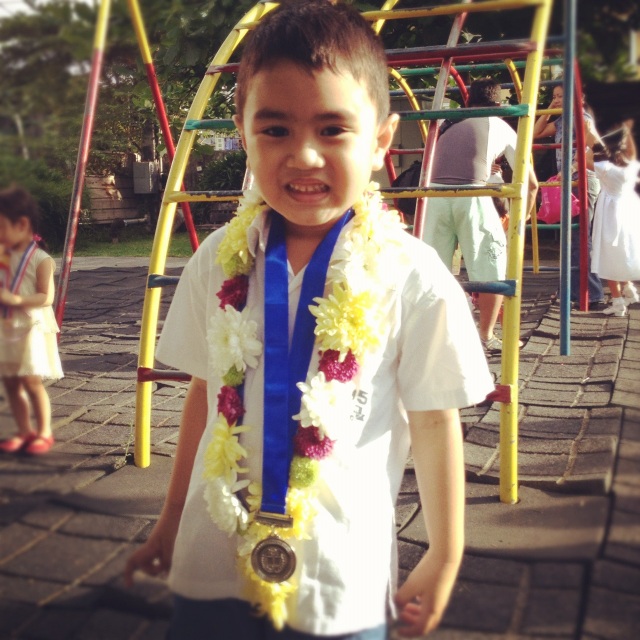 I still haven’t figured out what to give the brat. He’s asking me for a cellphone (oh, how times have changed! Imagine a five year old asking for a cellphone! Thank God he didn’t specify iPhone – I think he’s okay with just an ordinary one). What do you think?

2 thoughts on “The World According to Joey: Graduation”