If there was one man I was excited to see as a vampire, it was Johnny Depp so I started counting the days from when I first heard he was doing Dark Shadows, and with my all-time favorites Michelle Pfeiffer and Eva Green, no less.

Alas, I was in for a disappointment. While I can usually appreciate Tim Burton’s interpretation of the macabre tales he is so keen on filming, this was a straight miss.
Dark Shadows was originally a drama series in the 60s; that formula worked well and there was no need to suddenly turn it into a gothic comedy. And in doing so, he wasted the acting talents of Michelle, Eva and Johnny. And I have to admit he also did a disservice to his partner Helena Bonham-Carter, who, crazy she might seem, we have to admit is a brilliant actress. Those actors could have brought their acting chops and redeemed this film from the campiness everyone was already predicting it would be.
I’m not saying they don’t have comedic timing; they do, and they managed to elicit laughs from the predominantly silent audience. If anything, it was the cast’ great acting that salvaged this movie – they made it quite believable despite the absurdity of making a tragic vampire’s life comedic. I couldn’t help but smile when Depp tried to pry open a television to figure out the sorcery of Karen Carpenter singing from inside a box and I laughed out loud when he saw the McDonald’s neon sign and thought of Mephistopheles (the demon).
And one question that burns my mind is why does Burton insist on making Depp look like a caricature in all of their collaborations? Depp would have been an even more striking and menacing vampire had he shown up with an unmade face. I would have given anything for a Johnny made up like Tom Cruise or Brad Pitt from their Interview with a Vampire movie in the 90’s. Vampires are supposed to be beautiful, but Burton had given me a fanged-clown. And I almost winced when I saw Depp with all that muck on his face, parading under an umbrella.
I have a similar complaint with Green, who has always been one of the prettiest actresses around, in my opinion. Why make her look like a trying hard prostitute with garish blond wig and blood-red lips (although I have to admit, she still looked gorgeous)? And come to think of it, she would also have been a perfect Josette/Victoria. 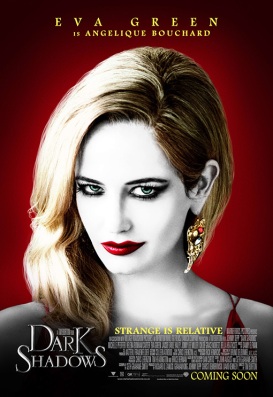 The story could have used a lot of help too.
Set in the 1970’s, the movie tells the story of Barnabas “Barnaby” Collins (Depp), a wealthy 18th century businessman from Maine, who spurned the witch Angelique Bouchard (Green) and was cursed to become a vampire. Fast forward to 1970, and Barnaby is accidentally released from his coffin and sets about to rescue his dysfunctional descendants and revive the family business. Unfortunately, Angelique is still very much around and immediately sets about ruining Barnaby’s plans, all while trying to rekindle their former affair. Mix in Victoria (played by Australian actress Bella Heathcoat), a reincarnation of Barnaby’s great love from the 18th century, Josette, who jumped off a cliff after falling under a curse from Angelique.
All the formulaic ingredients for a tragic love story was already present in the original story: a dashing male protagonist, a beautiful fiancée, a vengeful scorned woman, and a dash of the supernatural. Alas, what the movie failed to do was to establish early on what the curse actually was. Angelique supposedly cursed Barnabas to vampirism, but also put a curse on his family – but as with the TV series, movie viewers also don’t get any answers as to what this curse was.
And it didn’t shed much light on how Angelique was able to survive more than 200 years. She was a witch, but she was human after all. In the TV series, Angelique was killed by Barnabas soon after they were married and he found out about her witchcraft – she turned into a succubus and a ghost in later storylines.
Oh, and the ending? It was a very different ending from the series, although if teenage fans of the Twilight series are watching this movie, they would probably give a thumbs-up. In the movie, Victoria killed herself jumping off the same cliff that Josette fell from, but rescued and turned into a vampire in the last minute by Barnabas; in the series, she died off-screen and Barnabas develops a relationship with Dr. Julia Hoffman (Bonham-Carter) and Josette remained, well, a ghost.
My verdict? If not for the lush imagery and my love for Johnny, Michelle, and Eva, and my principle that it’s no use crying over spilled milk, this would have been a total waste of my hard earned money. But if you can avoid this movie, then do so. You can just wait for it when it gets shown on cable.
*All images taken from Google.