I was fortunate enough to be sent to Florida for a couple of weeks; as much as I hate going on business trips (I find them stressful and I tend to get homesick), well, they can be inevitable at times so, why not make lemonade out of lemons, right?
Seeing that I had one full weekend to roam around, I immediately researched how to go around the state. I don’t drive, and neither do my companions, so why not take the good ole bus, right? And there goes riding the Greyhound off my bucket list. Just kidding it’s not on my list. 😀
Anyway, we were staying in Tampa, which was about an hour drive from Orlando but riding the bus took us almost two hours. Works for me as I slept the entire time (when I wasn’t busy catching up on social media (the bus has free wifi).

Our first stop in Orlando was Disney World. Fine, our first stop was the outlet store but who’s interested in what we bought, right? Disney World is actually one big complex with four theme parks: Magic Kingdom, Epcot, Animal Kingdom and Disney’s Hollywood Studios. I was leaning more towards Hollywood Studios or Animal Kingdom but since it was my friends’ first time at a Disney park and better to be safe, we settled for Magic Kingdom.

If you’ve been to HK Disneyland which I wrote about here and here, you would instantly recognize this view which greeted us upon entry:

And of course, Sleeping Beauty’s castle:

There were not too many rides that are b0th kid/adult friendly (rides were of the carousel variety and we were obviously too old for those) and this being my friends’ first time at a Disney park, we made sure to get as many photos with the beloved mascots as we could manage. Here are some of my favorites: 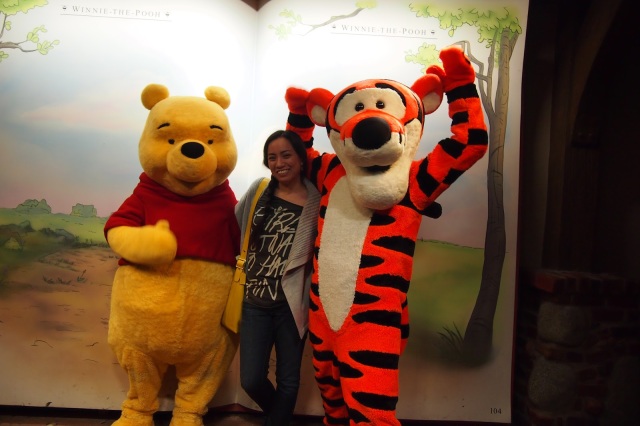 I was looking to buy some Mickey Mouse-shaped chocolates like the ones my tita bought for me many many years ago in Tokyo but I never found them (in HK or in the US). I guess this means I should go to Japan and check out the Disney park there.

Cookies and sweets were kind of limited here; even the merchandise. It was more fun shopping in HK but I guess my wallet heaved a very deep sigh of relief that day.

Of course, when you’re in Disneyland, you gotta make sure you see the fireworks.

I’ve been to three Disney parks in as many months and I got to see different versions of the afternoon parade – the first one had the mascots dousing the crowd with water while the second one I saw had more of a circus-theme; both of these parades were in HK.  Well, we missed the one in Orlando but we did manage to squeeze in the Electrical Parade, where all sorts Disney characters traverse Main Street on board brightly-lit floats.

My favorite was the one with the seven dwarfs. I mean, we all get to see Snow White in parades and all, but the dwarfs? I wanted to hug them all! 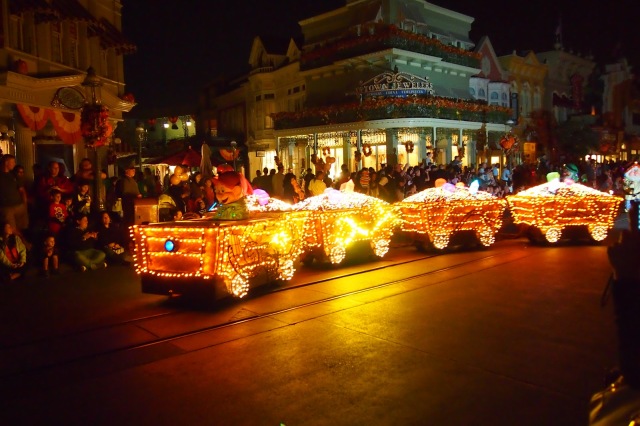 I don’t know what it is about Disney, but it really is a magical place and the happiest place on earth. I would have wanted to explore the other parks but we only had a day to spare so I guess I’ll have to visit another time? 🙂