It was a very long drive to Amsterdam from Brussels – 250 miles in three hours or so but it was so scenic so I didn’t get bored at all. The two boys slept through it though so they missed all the windmills, the green fields with lots of cows and cottages, and the various bridges and rivers. Our guide even told us we were very lucky to see flower fields along the highway this time of the year – apparently, it’s too early for the flowers to bloom (I chalk it up to Mother Nature making sure we have the best European holiday).
One of the first signs we were in the Netherlands? This:
Our first stop was this family-owned cheese factory (or farm?) where the nice lady of the house demonstrated cheese-making. It’s a very tedious process, apparently, involving cutting the cow’s milk until only the solid parts are left, or about 10% of the total milk you started with and putting flavors on it. Unfortunately for us, she didn’t share the secret ingredients of their cheese: you’d have to marry her if you want to find out. But I did learn something new from her – that cheese, like wine, gets better with age. No wonder they go so well together! The oldest cheese they have in their farm is almost 40 years old!
After the tour, we were led to the gift shop (but of course!), where the first order of the day was free cheese sampling. Four plates of cheese were laid out for us. I only got to taste two – the pepper and the smoked cheese ones. The latter blew my taste buds away. Oh. So. Good. It simply tasted perfect, not to musty or thick, or sour, and melted in my mouth. I wanted to queue up again just to get another free taste.
But since I was too shy, I just hoarded. I grabbed so many of it one of the owners told me the 11th bar was free. Hahaha! (and you can probably guess what a nightmare it was come luggage packing time as those bars weren’t the only ones I managed to hoard).
I went crazy over the souvenirs – too bad most of them were either breakable or too heavy:

After that, we went into the city itself and hopped on the cruise. Quite expensive at 15 euros per person, and not really recommended as there isn’t much to see from this POV than from walking. And it was unbelievably hot – this, coming from someone living in a tropical country. Such a change from the cold summer in France and Belgium (where the temperature ranged from 13 C to 23 C when we were there earlier). I thought it was going to be a cold day that I wore a long sleeved-lace blouse under my corduroy dress that I was a grumpy tourist before the cruise was over (you all know how I transform to a monster when it’s hot).
One curious thing you will come across during the cruise are quaint little boat houses. A couple of decades ago, there was a shortage of houses/land in the country so people were allowed to build houses on boats. We saw very distinct boathouses – some even had gardens on their roof and hammocks out back. Some were obviously very expensive, with multiple levels like a ship, while some were very simple ones made of planks of wood, like an overgrown barge.
There are some more strange sights you will find in Amsterdam, such as the forward-tilt of the houses in the city. Our guide said this was so that when they pull their stuff through the pulleys, they won’t hit the facade of the houses. Plus, they make houses look bigger.
So, no, my photos aren’t slanted and your vision isn’t playing tricks on you.
Oh, and those pulleys (or hooks) you see at the top of the houses? Those are used to pull heavy/big furniture up into the houses. You see, houses are so narrow (the country has limited land, and most of it is only reclaimed which is why when you think of Netherlands, one of the first things you’ll probably associate are dikes, of which they are expert builders) that they can’t have wide staircases or elevators. Being a resourceful bunch, they came up with the clever idea of installing pulleys instead.
Oh, and some other stuff you don’t get to see everyday: live porn, public smoking of marijuana and a hemp museum or two.
Live porn show and strip tease as you pass by shops in the red light district, even in high noon:
Everything hemp-related:
As we were walking around, I could smell a tobacco-like scent in the air, although fainter, and sweeter and not at all irritating like cigarette smoke – it was only later that our friend told me “that’s marijuana you’re inhaling.”
Hahaha, so I guess I smoked marijuana without even knowing it. Crazy.
Before going back to meet up with our group, we went to a cheese store and what do we see? Our very own quezo de bola, right there on the shelves: 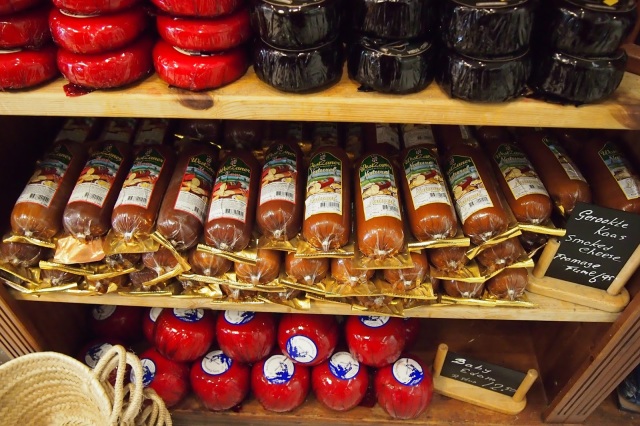 We didn’t get to see Anne Frank’s house (we stayed too long at McDonald’s for the free wifi) or Van Gogh, which is too bad as I don’t think those are enough reasons for us to make a second trip to this city, lovely as it is. I would have skipped lunch for it though but I got outvoted by the hubby. Hahaha!

2 thoughts on “A Summer Day in Amsterdam”