I was pretty much on my own during the Belgium leg of our trip and as much as I wanted to be adventurous and figure out the many cities nearby on my own, my present condition prevented me from doing so. It would have been a nightmare enough to get lost in a foreign country where majority of the people speak either Dutch and French, but to be pregnant and lost at the same time? No, thank you.
So I did the predictable and got me on some tours. But, since our base was in another city and all the tours started in Brussels, I still had to haul my ass off to the train station and get to the capital city. Every day. It’s a good thing it was cold – like 14C cold so I had no problems at all walking 30 minutes everyday from our hotel in Mechelen to the train station. And thanks to google maps,the nice policeman at the Brussels Central train station (who only spoke French apparently – he had to look for a colleague who could translate the directions for me), and this talent of reading train maps I seem to have developed late in life, I got on alright.
Anyway,  enough about that. As I said, Brussels was my starting point every day. I’d get there early in the morning (8:30! Imagine I had to leave Mechelen really early to get on the right train) and head back to Mechelen close to 9PM each day. A good thing the travel agency was right beside the Galeries Royale Saint Hubert and there were restos nearby. I got to try Gaufre de Bruxelles, with their huge serving of beef stew with Belgian fries and corn salad. Oh so yum. And then I drowned everything with a mug of hot cocoa. I wanted to try their waffles but there was no way I could still fit it into my tummy after my lunch.
The Galeries Royale Saint Hubert is actually made up of two connected halls, the Galerie du Roi and the Galerie de la Reine (King’s Gallery and Queen’s Gallery), each more than 100 meters long. There’s also a shorter, perpendicular hall called Galeries des Princes (Gallery of the Princes). It’s apparently the oldest covered shopping arcade in the world (or in Europe??? Do let me know?), and was built mid-19th century to transform the then ill-lit alleyway into something the upper-class wouldn’t mind hanging around in. In short, they wanted to make the place more sosyal, hence, putting up the shopping complex. 😀

I didn’t get to go inside most of the shops though, since they opened late and were close by the time I would get back to Brussels from whichever city was my itinerary that day. But luckily, the cafes and chocolate shops close a little later so I was able to snap some pics.
Godiva and Neuhaus have shops in the Galeries. I read somewhere that Godiva isn’t really favored by the locals and that Neuhaus is the place to go (which explains why I didn’t find Belgian chocolates that good when hubby kept giving me Godiva – I’d take my Swiss chocolates over Godiva any day) and when I finally got to try some of their products (did you know Neuhaus invented pralines?), I fell in love. Hahaha. Not sure if the malls in our beloved PH carry Neuhaus but they do have a stall at the NAIA – so you will surely see me there.

On our last day in Belgium, we heard mass at the Co-Cathedral of St. Michael and St. Gudula, located atop the Treurenberg Hill in Brussels. The present cathedral was built at the beginning of the 13th century and took close to 300 years to complete! It was built on top of an old chapel from the 9th century.
Again, I am awed by the interiors of European churches. They’re all so grand. This cathedral  is more airy and exudes a lighter atmosphere compared to others, perhaps because it appears to be freshly scrubbed and painted and therefore, doesn’t look so gloomy.
On my way out of the city for one of my tours, we passed by this structure which reminded me of the Sacre Couer in France. Turns out, it is the Sacre Couer (of Belgium!). According to our guide, King Leopold went on a visit to Paris in the early 20th century and when he saw the church, he wanted to have one built in his own country. 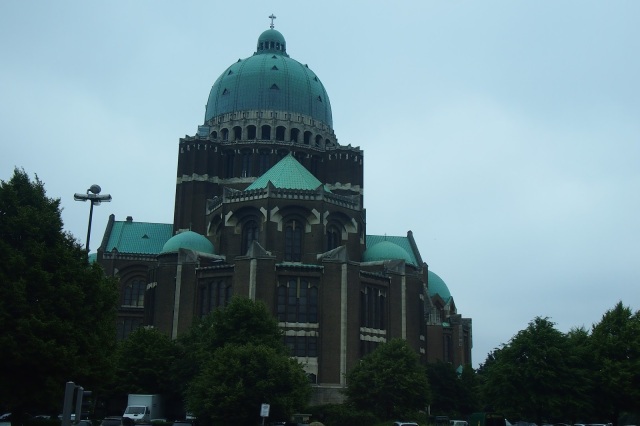 After mass, we went to the Grand Place (Grote Markt) of Brussels. Hubby had been raving about this place from his previous trips to Belgium and while it is the biggest of all the grote markts I’ve seen across five cities in Belgium, it kind of lost its appeal since I prefer the one in Bruges more. 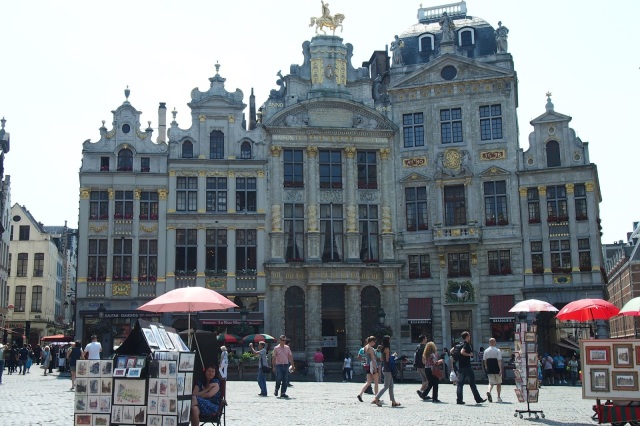 Of course, what’s Belgium without all the chocolates, right? Every street has at least one shop and at the Grote Markt, there are rows and rows of chocolate and sweets shop.  There’s actually a saying that the Belgians can make chocolate out of anything. 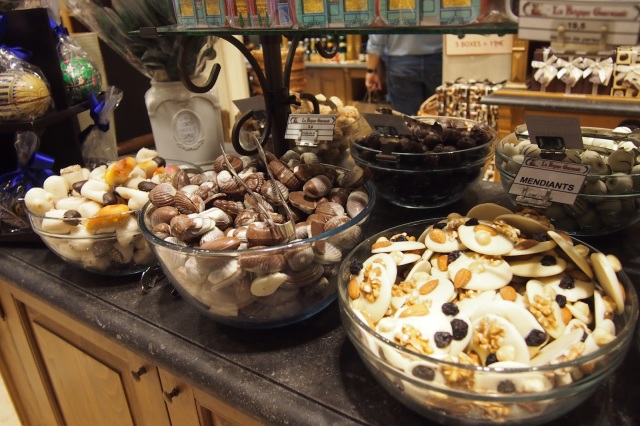 We didn’t have enough time to spare to visit Herge and his famous creation, Tintin, but we did go inside a Tintin shop, tucked away between sweets shops.

Oh, and before saying goodbye to Brussels, we just had to see the fuss that is the Mannekin Pis – a statue of a little boy peeing. For some reason, this bronze fountain sculpture has become a national symbol of Belgium. There’s no definitive story as to its existence but the one I like most is the one also often told to tourist:  that of a father who lost his kid and had the fountain made as gratitude to the locals who helped find him, urinating somewhere.
Anyhow, the statue gracing the fountain is now just a replica of the original from 1619, probably because it kept getting stolen and had to be kept somewhere safe.

If you have limited time in Brussels, I would suggest you start the day visiting the Cathedral, then go straight down the hill and cross the street. From there, the Galeries Royale is but a short walk (you’d be at the Galerie de la Reine end of it). Once you’ve had your fill of shopping (there aren’t many shops actually, but they do have cafes, a movie theater, and Delvaux and Longchamp stores), just exit the gallery from its main entrance and head for the side straight across – and voila! The Grote Markt is right in front of you. The Mannekin Pis is located in a side street off the Grote Markt.
* I still owe my Ghent, Mechelen, Bruge and Paris posts. Stay tuned! 🙂

One thought on “Wandering Aimlessly in Brussels”