Oh, Bruges.
Calling this idyllic little city quaint or charming is an understatement. As per the hubby (I went there by myself but he just had to visit it the next day after hearing me gush about it all night), it was like being in a theme park… except that everything’s real. It is literally the most beautiful city I’ve been to (along with Paris; but Bruges just tugs at my heartstrings) and it was probably a bad decision to go to this city first before seeing the rest of Belgium: all the other cities paled in comparison.
Perhaps the 16th century inhabitants of the city will disagree, but the decline of Bruges’ power at that time, both economically and politically, is what we have to thank for its preservation. Bruges used to be the thriving capital of the Flemish region, owing to its port where traders would come and go. However, silting eventually dried up the waterways and losing its access to the sea, its prosperity also declined and most of its citizens eventually left. Bruges was stuck and frozen in time for all us 21st century people to marvel at.
Practially every building and every street in the historic center of Bruges, a UNESCO World Heritage Site, is a sight to behold. But probably because of its size, it is much less intimidating than Paris.
A few minutes into the town center (where the touristy stuff are), you’ll be greeted by the lovely view of the Minnewater. I wasn’t able to snap a decent photo except for the above (it was raining a bit and I was just too busy gawking at the sight) but it really is very lovely – imagine a clear lake with dozens of white swans happily flapping about on the water. Dreamy isn’t it? 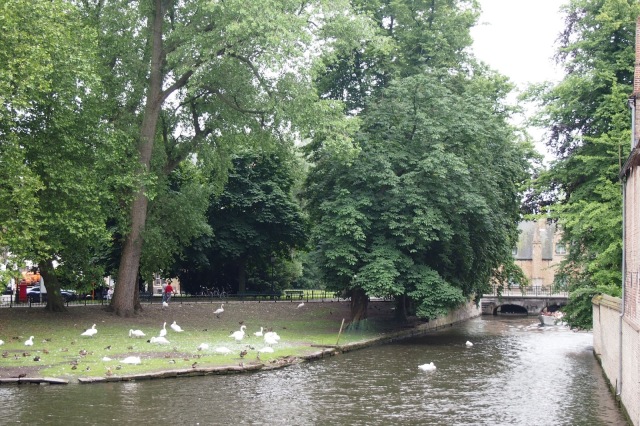 Swans are actually one of the symbols of Bruges. According to legend, the people were punished by Maximilian of Austria to keep swans on their lakes for executing a member of his court. Whether true or not, swans are a very nice touch to the already picture-perfect setting of Minnewater.
Once you get over how beautiful the lake is, take a few short turns and you’d see the Beguinage. A beguinage is a part of the city (mostly in the Flemish region) that’s dedicated to women of the beguine movement: women who are not quite nuns but live like one. They take the vows of chastity and obedience but not of poverty, and are free to leave anytime. Anyway, in beguinage of Bruges is a row of neat little houses surrounding a garden of tall poplar trees. Benedictine sisters now live in these houses and while they may look new, according to my trusty guidebook, the oldest one was built in the 15th-16th century. There’s also a nice little church you could visit (although I hear it’s only open on certain hours and you have to pay a minimal fee to view the artworks there) but we didn’t have enough time for it (sadly, our tour was only for half a day).

It was raining a little bit and I was the lone solo traveler in our group but I wasn’t about to scrimp and miss out on riding one of the little boats along the canals of the Venice of the North – it is one of the things you should never ever fail to do while in Bruges.
Our boatman was very talkative and he said that privately owned boats are no longer allowed; this is to ensure that all the boats that traverse the canals are controlled and standardized. Makes sense. Imagine all the rich people who would otherwise fill up the waterways with their glammed up boats.
Again, I didn’t get many decent photos during the boat ride – there were some rude girls in front of me (fine, they were probably in their late forties but they behaved like girls) who kept flipping their hair and taking selfies of themselves, never mind that I almost hate half of their blond hair, so most of the images of Bruges that I have are only in my memory (cue soft music for dramatic effect). Pardon me for being snarky but they almost ruined the boat ride for me. ALMOST – in the end, the beauty all around me was enough to make up for it.
St. John’s Hospital, which is one of the first buildings you will note on the boat ride, is one of the oldest and longest serving still functional hospitals in Europe; the oldest known document dates it as early as the 12th century. But unfortunately, it lost that functional part of its distinction back in the late 1970s when a newer hospital was constructed and St. John’s was converted into a museum. Again, I wasn’t able to go in because of limited time but it does give me another reason to visit in the future, no? 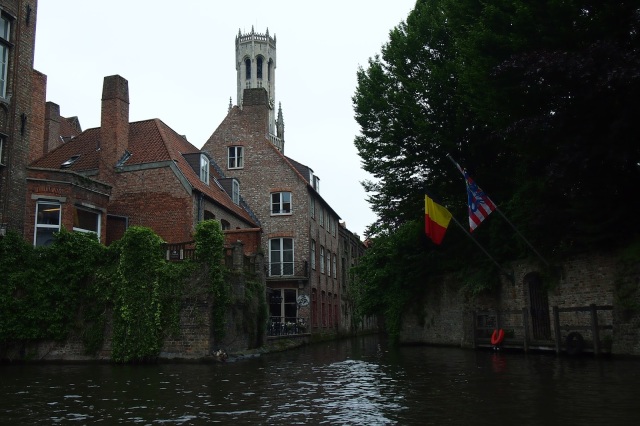 After the 30-minute boat ride, we had a few hours to roam about on our own in the Grote Markt. There are a couple of streets off where you can shop til you drop (or window shop, like me and still drop out of exhaustion, haha) – there are a lot of local and foreign brands with boutiques all over Bruges but don’t expect to see big name luxury brands here.
The Belfry and Cloth Hall is one other symbol of Bruges; it was here where the valuables of the city were kept. The Belfry also served as a watchtower, with bells of different sounds to warn of danger, mark the time, etc. Currently, it has a number of carillions which often fill the air with the sweet tinkling sound of church bells, much like in Mechelen.
An optional part of our tour was to inside the Church of Our Lady of Bruges. There’s a very minimal fee (I think it was at most two euros; down from six since it’s under renovation) to get in since it has a couple of valuable artwork. Of course I just had to visit.
Tip to travelers: always research where you’re going and where possible, take all the optional parts. They may be added costs but they sure make your trip more worthwhile. 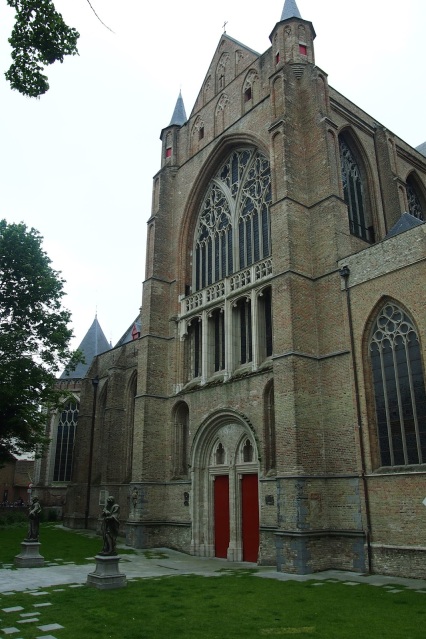 The church tower is the 2nd largest in Belgium; it lost the top spot to the cathedral of Antwerp by a mere one meter (Antwerp’s church tower is at 123 meters). Tough luck.
Inside the church is a sculpture of the Madonna and Child by Michaelangelo Buonarotti. Carved out of Carrara marble, it was supposed to go to the Church of Sienna but was bought by the Mouscron family and brought to Bruges (lucky for Bruges to have such rich citizens/patrons). 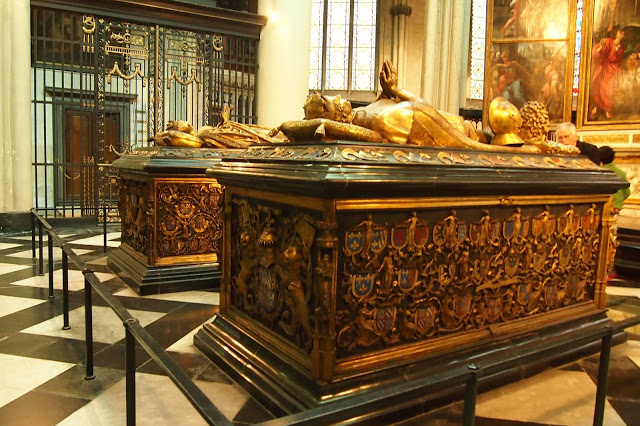 Oh, and I got to see two gleaming sarcophagi of dead royalty: Mary of Burgundy and her dad, Charles the Bold. The duchess died in 1482 in Bruges of a horse-riding accident, while the duke died in France in 1477. Their tombs are decorated in gothic and renaissance styles.
Well, I hope I didn’t inundate you with all sorts of touristy stuff. After the tour, I went round the market looking at the bright shop windows. I swear, if looking at sweets is fattening, I wouldn’t have fit into a plane. I read somewhere that Belgians can make chocolate out of anything – it’s probably true, judging from the colorful and endless chocolate shops flaunting everything from iphone chocolates to insect chocolates. 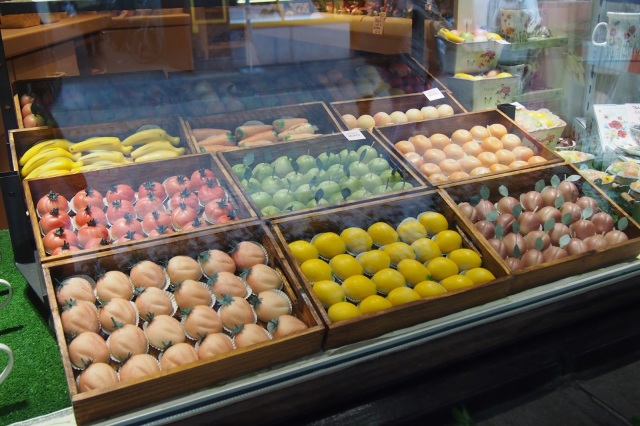 Before I conclude this post, I suggest you try the Flemish stew. Our guide, (who I must say is the nicest tour guide I’ve come across from my trips across three continents; my bad that I’m not really good with names but he’s from the Brussels City Tours), recommended that we try the Flemish beef stew and showed us the Restaurant Vivaldi which was right near the entrance to the city center from the Beguinage. We were all free to choose our own resto for lunch but I was traveling alone and I didn’t want to leave the group so I went with him (and discreetly chose a table where I could see him, hahaha).
The restaurant had mixed reviews on the net but I liked the unobtrusive service and enjoyed the stew so much. It was the best I tasted – very soft morsels of beef which melted upon contact with my mouth, with very rich flavors of butter, and what I suspect to be a few drops of wine. It was really, really good and despite the large serving, I finished off every single bite, including the fries that seems to go along with every dish in Belgium. And, since I couldn’t have wine like my fellow tourists, I just chased it all off with a glass of freshly squeezed orange juice. All for the price of around 25 euros. May be a bit pricey for some but it was a very good meal and I didn’t feel cheated.
I almost didn’t include Bruges in my itinerary – very few people seem to know of this place. In fact, have you met someone in your group of friends who has gushed about this place? Luckily for me, my friend Bretty told me about it and when I went to my OB to get a medical certificate (that I’m allowed to travel), my doctor told me NOT to miss Bruges. I’m glad I didn’t. And hubby and I are already thinking of visiting this city again.

One thought on “I Left My Heart in Bruges”