Let’s take a quick break from all the European posts and head somewhere a little closer to home: Hongkong. I’m about as big as a walrus and this is likely my last trip abroad until the end of the year so I had to make the most of it. By eating a lot.
We didn’t have any particular itinerary planned for this trip (except for the outlet stores that our friend was adamant we just had to go to; more on that in another post), so on our  third day, we agreed to have afternoon tea at the Peninsula, which is served at the Lobby Cafe from 2PM to 6PM.
We got there a little after two, but the line was already insanely long – we had to queue for an hour before we got a table. Good thing we were inside and the AC was working overtime. Otherwise, I simply would have fainted. Oh, and they have a casual vibe going on but please don’t wear flip flops.

Honestly, I am not a tea person. My parents both love tea (and coffee) but my tea “gene” never manifested. That, or I am just generally a lazy person who couldn’t be bothered with making tea. 😛
Oh but the scones were just so delish especially when mixed with the strawberry jam and the clotted cream! Quite filling too – one is enough to fill you up for your next shopping spree. And all those dainty sandwiches with smoked salmon, chicken, and ham were perfect (I skipped the cucumber one). I was too full before I even reached the third layer containing little cakes and macarons, not to mention the small serving of ice cream and a piece of truffle that came after.

And true to form, I ordered rose tea. I am really having a rose overload – I recently bought a rose facial wash and moisturizer, and regularly use a rose-based soap and perfume. I even use rose oils and spray for our house. Hahaha!
But I digress. The rose tea went perfectly with the scones. I mixed about a 1/3 cup of milk and and white sugar in it and it was just heavenly. We spent the next hour or so just being lazy and chit chatting. I guess afternoon tea is really one underrated English custom which would be nice to indulge in every once in a while.
After tea, we rushed back to our hotel to change and get a makeover session before our dinner at the Lung King Heen at the Four Seasons Hotel. They have a smart casual dress code but since most of our clothes were fit only for sightseeing and shopping, we all had to make a mad dash to the H&M across the street to look at least decent. Hahaha.
Dining at Lung King Heen wasn’t really part of our itinerary but that’s what’s good about having to agenda at all – we were like go with the flow or whatever. So when a friend of a friend recommended we try this place, the only 3-Michelin star rated Chinese restaurant in the world, we just had to go. I mean, I’m not particularly fond of Chinese food (as hubby would attest) but if it’s good food, then I’m all for it.
Literally translated to “View of the Dragon,” Lung King Heen has a marvelous view of the harbour from the 4th level of the hotel. We didn’t get a nice view though since it was a full night (in fact, our reservation was for 9PM since all earlier slots were taken) but we did get a secluded couch dining area all to ourselves. A big plus that they gave me a fluffy pillow to rest my back (Don’t you just love dining at these places? The Peninsula also gave me a nice pillow for my back during our tea earlier. They really know how to pamper guests).
I loved the ambiance. It was classy and everything but didn’t feel stuffy at all. And the staff were all so nice and attentive. I don’t like fussy servers who are downright obtrusive but we never felt that here.  I felt so right at home I wanted to kick off my heels.
Of course, being a top-notch restaurant,  expect the prices to be quite on the higher end of the spectrum. The tasting menu costs a wallet suicide inducing HKD 1,600++ per set – which of course was way too expensive for us. Hahaha. So we opted to order ala carte (which was actually a good idea since of the three of us, two don’t eat much, myself included), which greatly reduced the cost to roughly the same, but for all three of us instead of for one.
For our appetizer, we had this crispy tofu with day fish surrounded with chili sauce. I don’t recall ordering it and I didn’t see it in our bill but it was oh-so-yummy. I don’t eat tofu at all but this one made me change my mind – melts in your mouth goodness. 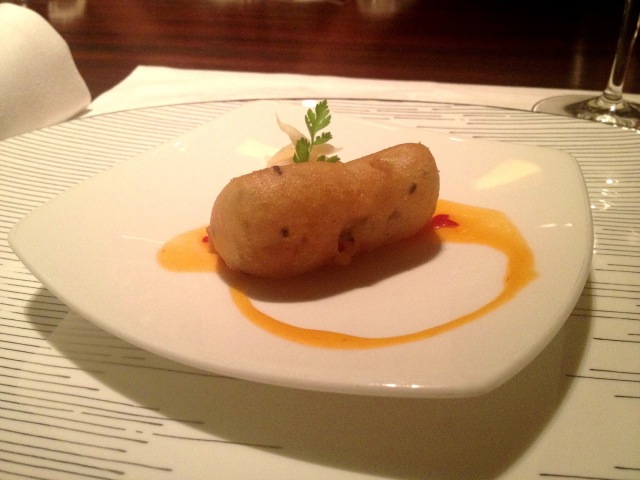 Our next dish was the crispy scallop with fresh pear and ham. This was served with fresh lemon and sugar, and we were also given three different chili sauces (light, moderate to hot; but I found even the hot disappointing as it wasn’t spicy at all!) to mix to our preference. The different ingredients would have been powerful on their own but surprisingly, they all tasted good together and I didn’t get that fishy taste at all from the scallop. Again, the dish melted in my mouth – I wonder how they do that? I do wish though that it was a bit more flavorful as I found it a tad bland without the lemon juice and chili sauce. 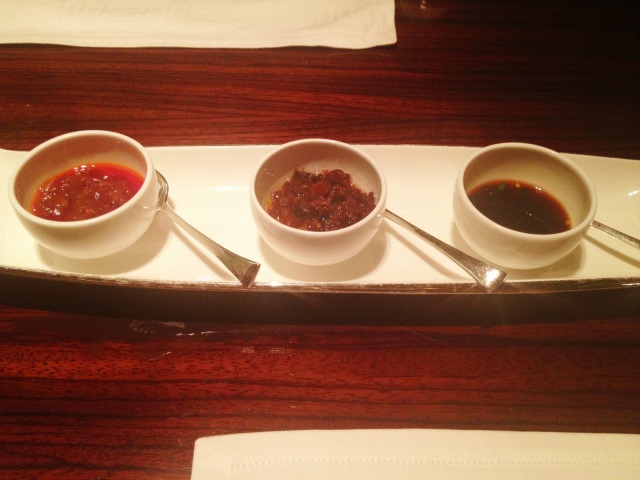 After all the dry, crispy dishes, I was looking forward to the next dish on our list – the shrimp wanton sweet and sour soup. It was my kind of spicy too and the shrimp must have been cleaned and cooked so well that my seafood allergies didn’t kick in one bit. I loved it! But make sure you have a glass of water nearby as you can get very thirsty. 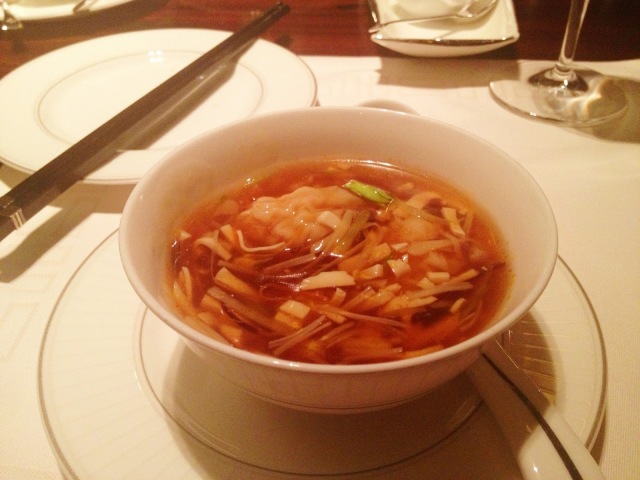 I was more or less undecided whether I liked the place or not but their bestseller LKH roast chicken was served next and I went straight to heaven. You know how we have roasted pork (lechon) here in the Philippines and everyone scrambles to get a piece of the crispy skin? Well, this chicken has crispy skin which was way better than lechon skin ever was. It was thin, crispy, and so flavorful. It didn’t crack when you try to peel it off the chicken but it melted upon touching my tongue. Simply put, it was the clear winner of the night for me. 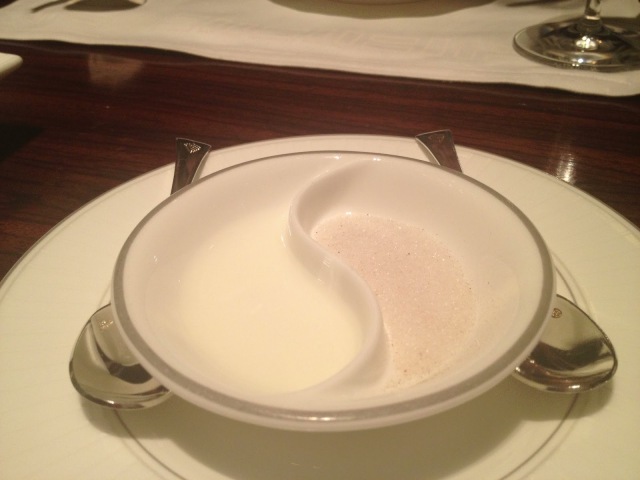 I was too full by the time our last dish was served – crispy noodles with vegetables and pork so I couldn’t comment much. And besides, after the roasted chicken, it was kind of a let-down. It was good to be fair, but not mind-blowing. In short, I’ve tasted better. 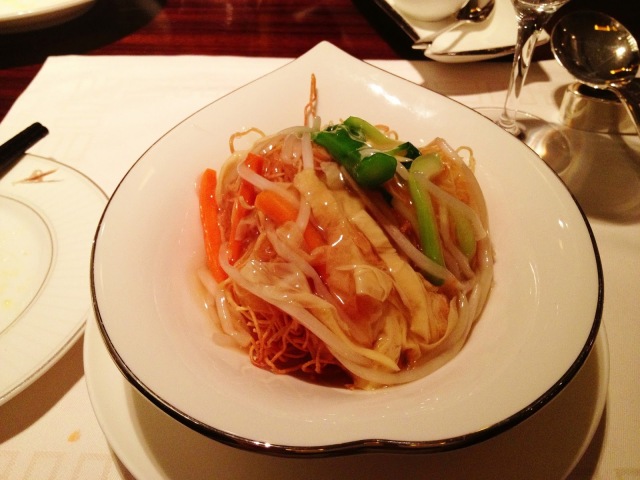 Of course, even with our wallets quite silently complaining already, we weren’t about to let the experience go incomplete without sampling dessert so we ordered the red bean puffs. To our surprise, we were also served custard puffs with jelly (or whatever it was called), which, according to our very attentive server that night, was quite a bestseller as well.
I would have been very happy with the red bean puffs, what with the gently sweet taste of mashed red bean enveloped in a very soft crust bursting in your mouth, but the custard puffs made me forget my name. Hahaha! I can’t describe it but do order it if ever you find yourself here. 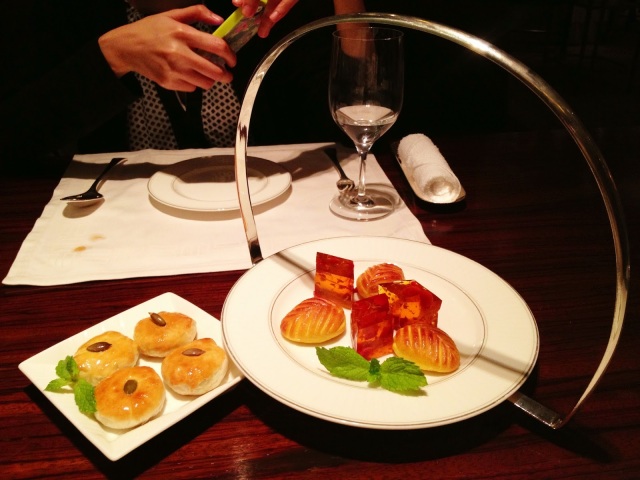 All in all, I would say the place is a definite must-try although there are some dishes which left me wanting a bit more, considering its Michelin rating. Oh, and for those on a budget, be prepared to spend at least US$50 per person (and that’s already the lowest you could probably go).