Since it was my first time in France, I made sure to cross off my list the touristy stuff – and of course, Versailles ranks high up on that list. I mean, come on, right? 😀
Again, we got our tickets from this trusty travel agency we discovered along Saint Michel, and got the one including entrance to the fountain show. The fountain shows are not done every day but since it was a Saturday, we were required to get it if we wanted to enter the palace gardens (which is a must!).
Versailles is about 20 kilometers from Paris. Fortunately, traffic in Europe isn’t as horrendous as in Asia (and Manila in particular) so it took our bus less than an hour to get there. Oh, and bonus points because the bus passed the Eiffel Tower.
Versailles is probably famous for being a symbol of the excesses of the French monarchy in the 17th century. Just think about it – they already had a huge little palace called the Louvre in the heart of the city but they just had to have another somewhere in the suburbs. It was initially a hunting lodge which was refurbished and expanded into a marvelous chateau to which the royal family formally moved into around 1682. They ultimately abandoned the palace and returned to the capital during the French revolution.
The palace is H-U-G-E and I think only portions of it is open to the public, judging from the size of the structure outside and the actual tour we had and rooms we visited.
On the second level are several apartments, most striking of which, of course, are the Grand Appartement du Roi (King’s Apartment) and the Grand Appartement de la Reine (Queen’s Apartment).Personally, I liked the Queen’s and the Prince’s apartments more than the King’s, although the latter had several function rooms. 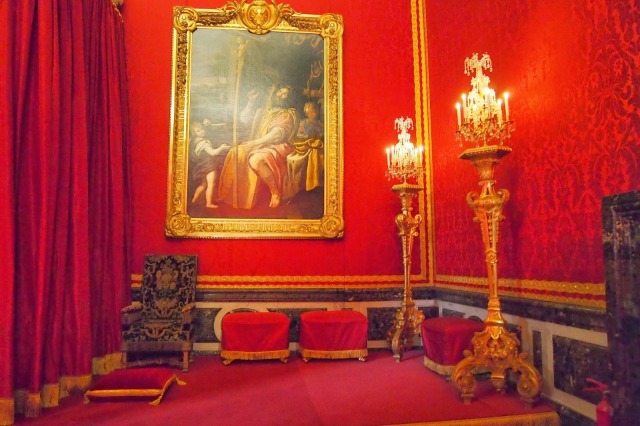 A little trivia: During the revolution, Marie Antoinette escaped the mob through a “secret” door on her bedrom wall that connects to the King’s chamber.
One of the highlights of Versailles is the Hall of Mirrors or Galerie des Glaces, which I’m sure most of you have heard of. And yes, it is as breathtaking as all those who’ve seen it before me have said. Perhaps even more in person. The seventeen arched windows overlook the famed gardens (which I’ll show later) and are reflected in the seventeen arched mirrors opposite them. The partitions of each window are covered in marble depictions of French symbols such as the fleur de lys. Any space left on the walls are covered in gilded sculptures and paintings and from the ceiling hang crystal chandeliers.
Oh, and yeah, I believe the main purpose of this hall was to connect the King’s and Queen’s apartments and for the King (and members of the royal family) to reach the chapel chapel? And while on that daily walk, members of the court can gather on the sides to watch them and probably try to catch their attention? (Sorry, images from The Tudors are playing on my mind as I type this). Those walks were probably very distracting, to say the least.
The Hall of Mirrors reminds me of an ice palace, not that I’ve been to any; maybe because of the way the light streaming from the huge windows are reflected on the mirrors and chandeliers. I still have a soft spot for the Galerie d’ Apollon at the Louvre, though (nothing beats the original).
There is a restaurant inside Versailles although we didn’t go there because it was a) too expensive, b) full and c) we didn’t want to waste our half day eating there and d) I probably wasn’t too hungry then coz had I been, I would have dragged my two male companions with me. Teehee. Oh, and there is a huge souvenir shop on the ground floor and a Laduree shop – the first one I was to find in Paris (I spotted another one near the Champs Elysee but it was already around 1am and closed for the day) so of course, I had to have my fill of THE macarons.
After having our fill of the opulent indoors, we headed outside to the sprawling gardens of the palace. And I do mean 800 hectares kind of sprawling! There are hundreds of thousands of trees and more than four dozen water fountains which are in full display during weekends of spring and autumn. These fountains still use the same water network from the reign of the kings! I tell you, the oldies know more about these stuff than we do in modern times. 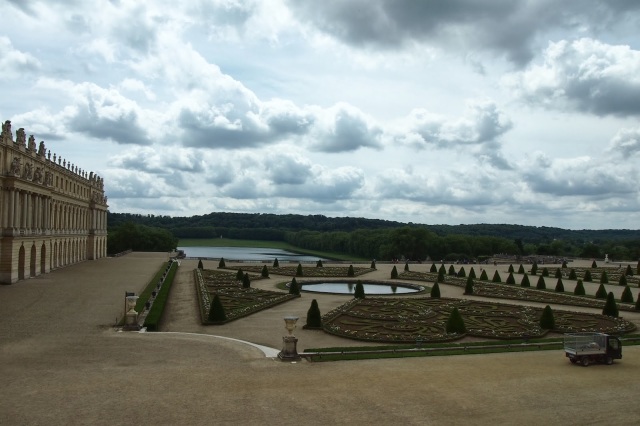 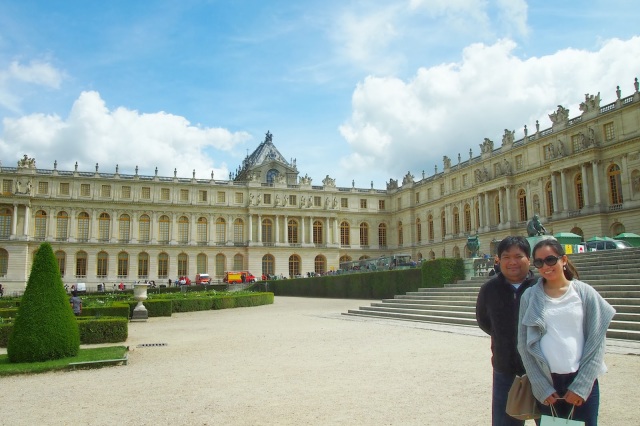 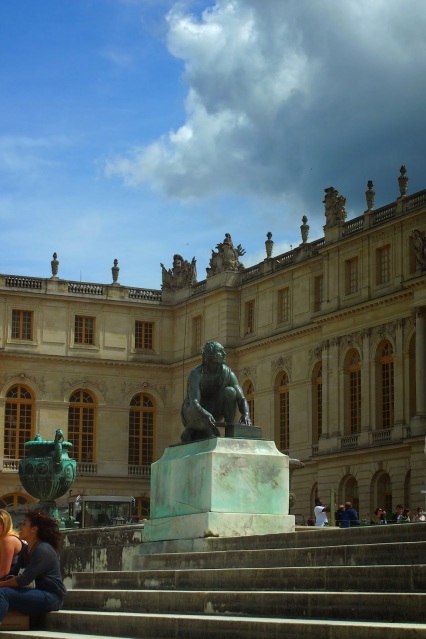 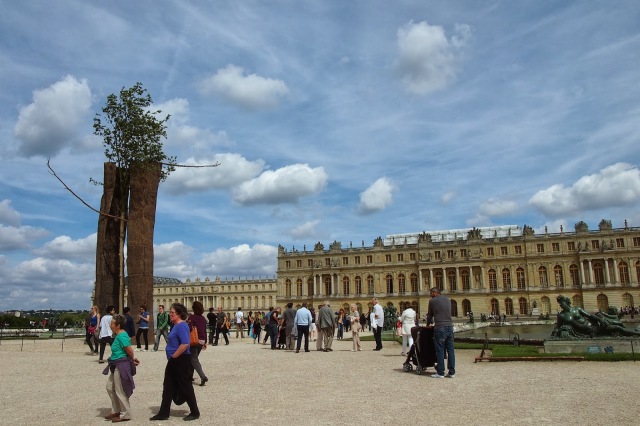 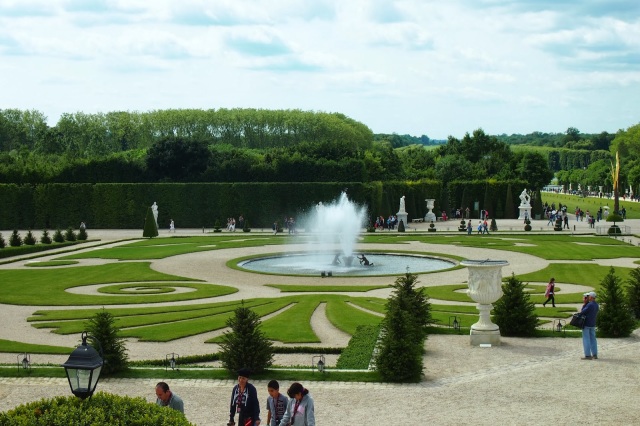 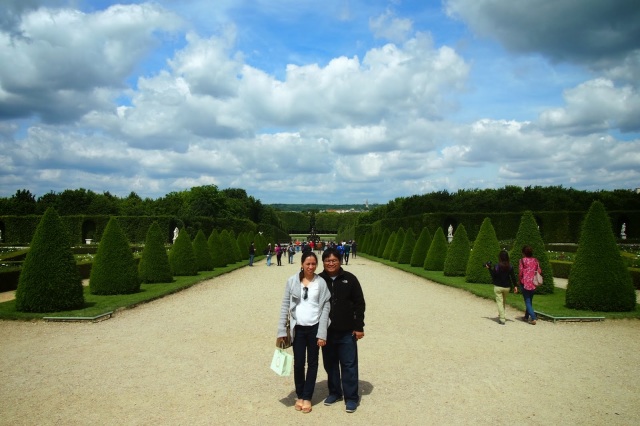 We didn’t get to roam around too much in the garden as it was simply too huge and I was too pregnant to walk which is too bad (the three inch wedges I was wearing didn’t help either) – we did find a sort of hidden garden within the garden which has a cafe (for those willing to shell out around 40 euros for a meal) and a food stall (for those who are on a tighter budget). We didn’t eat since our tour bus would be coming in about 15 minutes so we just took photos.
Unfortunately, the Bassin du Latone (below) was being repaired at the time of our visit so it was all boarded up. The fountains were nice but I was expecting some light show or musical fountain (demanding much?) so I was kind of disappointed that it was just that. Still, the garden is worth a visit on its own. 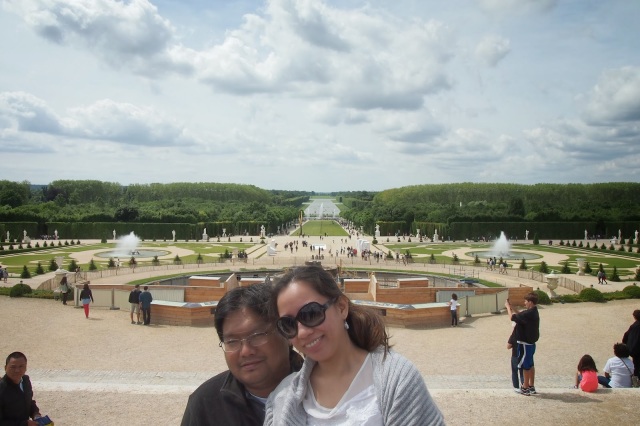 One other item crossed off my to do/visit list!