Paris is such a beautiful city that just about every corner is worthy of being photographed. I for one, would be perfectly happy getting lost and just wandering around the city.
However, Paris is also a big city and there are simply so many places to visit, not just within the city but also in nearby cities and provinces. We only had four whole days and five nights (we arrived on the 1st night via the Thalys from Brussels) and we decided to maximize it by going to the farther/bigger places like Versailles and the Louvre first and just work our way back to the city.
After we visited the Louvre, we headed back to Saint Michel to wander around and look for a place to eat before hearing mass at the Notre Dame. Honestly, I didn’t understand much since it was in French; they gave us missalettes but they were also in French so… I just prayed and hummed along. 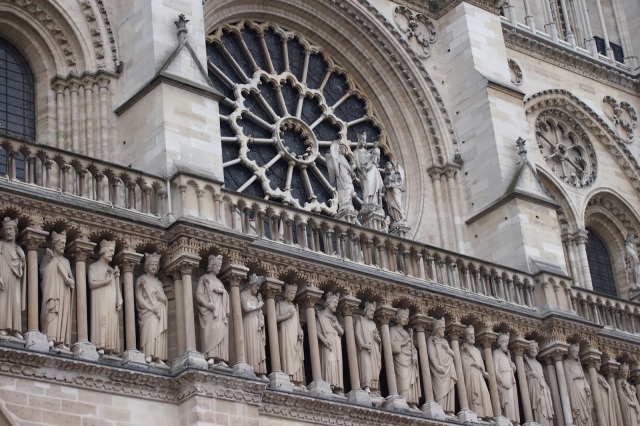 Curiously, the mass goers were so few, considering it was a Sunday, and this was the Notre Dame. I guess it’s true that the number of practicing Catholics is dwindling. But those we did meet at the church were so nice; most of them sang enthusiastically and smiled warmly at one another, even to us and I was just touched and sad that there were so few of them to take care of the church. So touched I think I actually gave 50 euros to the collection basket (or 20?).

The exterior of the church, for me, is even grander. Intricate carvings, gables, and a beautiful garden – I would gladly spend my Sundays in its gardens. 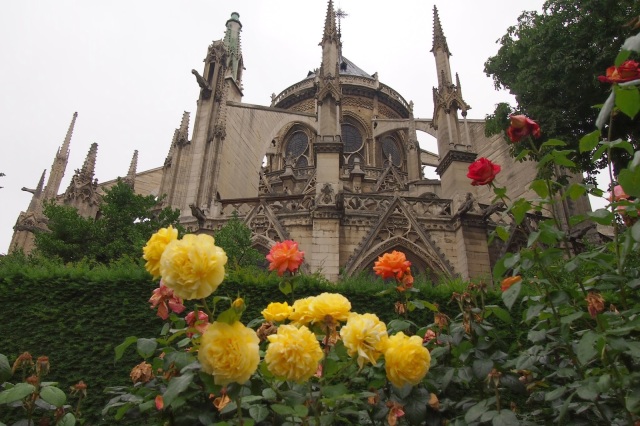 I haven’t seen any of the “Before” trilogy of films prior to our trip but hubby watched Midnight in Paris and wanted to see for himself the bookstore that was featured there. Only later did I realize (as I was watching the trilogy over the Christmas holidays) it was the same bookstore where Ethan Hawke met Julie Delpy after nine long years, in the second film Before Sunset.

Similar to the vibe in the film, the place is a gathering of sorts for the artsy crowd – there was even a live performance when we were there, and I suppose a couple of poetry readings and discussions among the coffee-drinking crowd seated around the place.
On the eve of my birthday, we went for a walk along the Champs Elysees, with the goal of reaching the Arc de Triomphe by night time. We started off at the Pont du Alexander, named after Tsar Alexander III of Russia, which was simply the most marvellous bridge I have ever seen, with gold cherubs and nymphs and a view to die for – the Grand Palais and the Eiffel Tower, among other monuments.
I wasn’t able to take many photos though, since it was already past 9PM when we got there, and I was tired from the whole day of walking. We had gone to the Saint Germain area earlier to visit the Chapel of Our Lady of the Miraculous medal and attend a meeting at a French journalism school(okay, just the boys – I spent that time getting lost around the area and looking for the Repetto boutique nearby which was unfortunately closed).
A lot of the shops at the Champs Elysees were closed by the time we came traipsing down its path (there goes that hidden agenda to shop at LV) and I was only able to enter the Disney store. I wasn’t able to go to Disneyland Paris – so I just made up for it by shopping at their store.

Our goal was to see the Arc de Triomphe at night and since it was summer, it didn’t get dark until almost midnight.

I woke up the next day with creaking bones and a slight fever so I opted to stay in bed and let the boys wander around on their own – too bad because I missed the Sacre Couer. To make up for it, hubby just took pictures of it and gave me a detailed description (he’d been there on a previous visit as well, so he made comparisons between his first visit and this recent one).
You might have seen a similar church in my Brussels post – and you’re not mistaken. But this one in Paris is the real deal. It’s the original Sacre Couer which so inspired King Leopold of Belgium that he had one built in his own capital!
The church,completed at the start of the 20th century, is made of travertine stone, a type quarried from the Chateau Landon. When it rains, the stones have a chemical reaction and secrete calcite, which acts as a bleacher and keeps the facade white, despite the passage of time and pollution.
Later that day, hubby and I decided to do something romantic and go on a cruise down the Seine river (translation: I nagged and twisted his arm until he agreed; a small price to pay considering I missed a chance to see the Loire Valley because of his schedule). Plus, come on, it was my birthday!
I think of the river cruise as seeing a lot of the magnificent structures of Paris in a short time – might be useful to if you take this at the start of your trip, since it can help you map out your route as you go from one palace/museum to another. It also offered us a different angle to the buildings as opposed to seeing them at ground level. 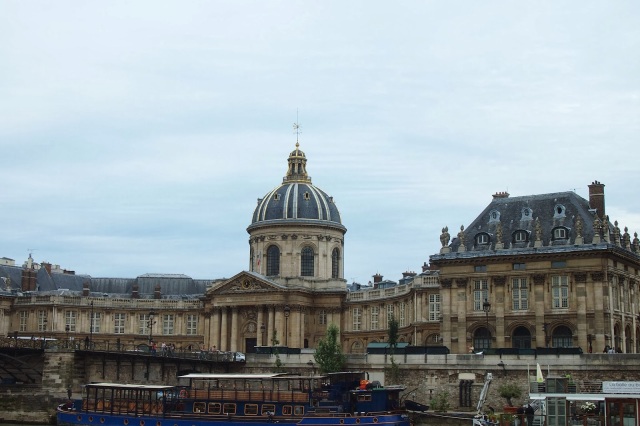 The river is very wide (in fact, there are two islets in the middle) and of course, this necessitates a lot of bridges. And I am sure you all know the practice in Paris where lovers put locks on the bridges with their names on it, and throw away the key into the Seine. I kind of missed what it was supposed to guarantee though – that you’d both be back to the same place in the future, or that you’d stay together forever, or both. I would have put a lock but I didn’t bring any and I didn’t want to just buy so I just gawked at the number of bridges and the number of locks and wondered just how many couples have pinned their dreams on these bridges.
And that concludes my European travel posts! I can’t wait to go on my next trip.

* All shots taken by me except for the Sacre Couer, Notre Dame interior ones which were taken by the hubby – hubby complains I never give him proper credit. So there. Oh, and shots of me and hubby were taken by our friend.