…but with all the delicious and seriously tasty food Paris has to offer, I can’t imagine how French women stay slim. It must be all that walking to get to and from train stations. I wouldn’t mind walking either if I have views of the Seine and old buildings to keep me company.

Our first meal in Paris kicked off a gastronomic feast that was to last almost three weeks. We arrived a little after two in the afternoon at our pretty little apartment at the Rue du Pont Neuf and were too hungry to venture too far. Luckily, there were rows of cafes and bistros nearby and we quickly settled at Le Mimosa.

I normally order ala carte since I don’t eat much, but I was so famished that I decided to order the set menu, which consisted of an appetizer, a main dish, and dessert. That translated to egg salad, steak and fries, and lychee panna cotta. The salad alone would have satisfied me: the eggs were perfectly boiled and the dressing was creamy, sweet, sour, and salty in equal degrees. My friends got some liver pate which was so rich we couldn’t stop gushing about it.

The steak was also great – I ordered it medium and it was a delight that the meat wasn’t rubbery or too thick, or hard to bite. Plus, it was spicy enough to satisfy my affinity for all things spicy, yet mild enough that I didn’t need to guzzle a liter of water. Oh, and did I mention the wine we ordered with it? The wine was so cheap! I think wine in Europe is cheaper than water which was why we ended up having wine with practically every meal while we were in Europe.

The French take their time eating food, and so, we did as the French did. We had a couple of hours to spare before the malls closed so we decided to rush to Galeries Lafayette for some retail therapy (yes, on our first day!). True enough, we were again hungry by the time we got home a couple of hours later and flopped straight into the waiting seats at La Creperie, at the corner of Rue de Pont Neuf and Rue Saint Honore.

It was a no-brainer what to order – I forgot the name of the crepe I got but it was big it filled my entire plate (which was twice as big as my face), and had ham and a big sunny side up in the middle. I loved every morsel of it! 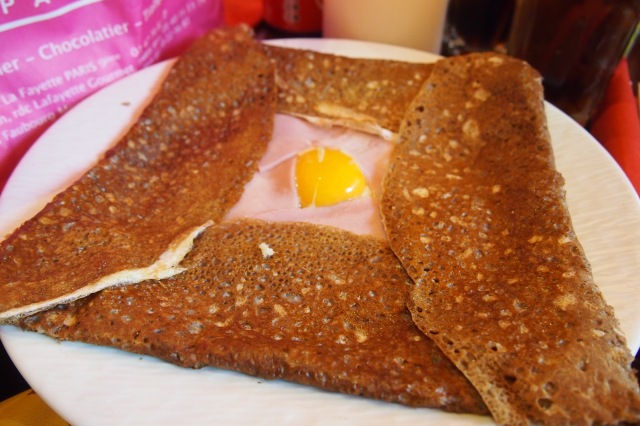 We also met a wonderful and handsome French/Vietnamese guy at the restaurant who ended up serving our table for the day. It got me thinking – why are the French so good-looking? I guess that means the not so gorgeous people are the ones who stand out coz in a sea of gorgeous people, they’re not used to plain looks? Hahaha. That means I have a shot then. 😛

There are cafes just about everywhere in Paris which is one of the things I love most about the city of lights. I am a big breakfast person and my favorite meal consists of croissants with lots of butter and jelly, or a croque madame if I am hungry, a cup of hot chocolate, and a glass of orange juice which are quite standard fare in Paris.

A typical cafe in Paris. People-watching is a serious sport here which is why tables and seats facing the street are always the first ones to be occupied. 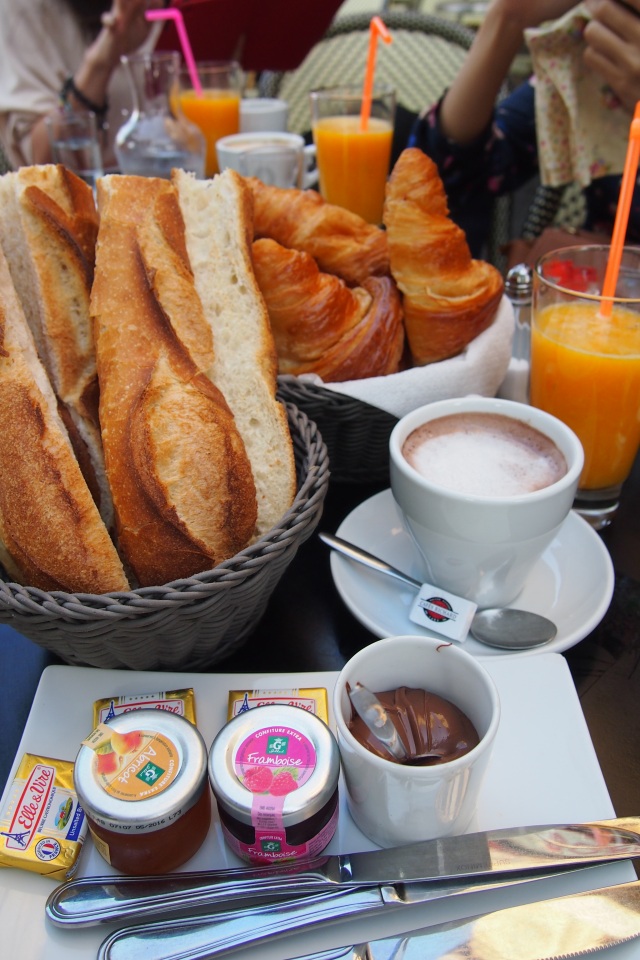 Carbo-loading in preparation for our Giverny/Orangerie tour.

Happy me.Dining al fresco with a crisp, cool breeze from the Seine is hard to top. 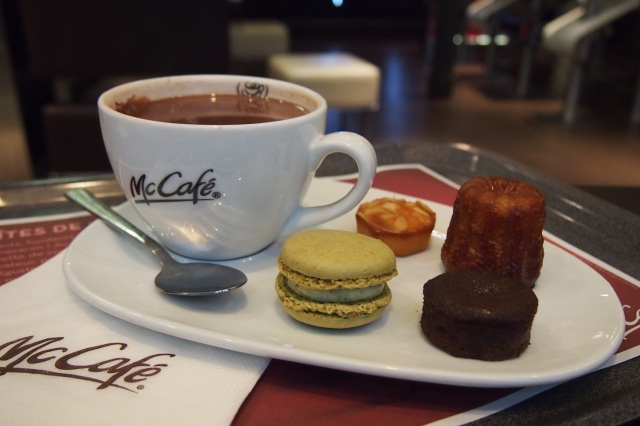 If not for that McCafe written on the mug, you would never have thought we were eating at McDonald’s, would you?

And well, for those of you in a tight budget, or are having anxiety attacks or homesickness, there’s always a friendly McDonald’s around the corner as well. But again, I am beyond amazed that even their McDonald’s looks so chic? Must be the air!

Again, I say… they say French women don’t get fat; why, oh why? Life can be unfair sometimes. 😛

2 thoughts on “They Say French Women Don’t Get Fat…”