If I have to sum up my entire visit to Prague in one word, it would be romantic. It is so beautiful and so firmly entrenched in the past that you cannot but view it with none other than rose-colored glasses. And one cannot deny that it seems shrouded in mystery, like most of its sister countries in the Carpathians.

Or maybe it’s just me – I tend to associate this region with my never-ending fascination with vampiric lore (way before Twilight, True Blood and The Vampire Diaries made it cool), given that Dracula lives in the mountains of the Carpathians and I will forever think of it in terms of magic and everything unreal.

Anyway, the historical/tourist area of Prague is quite small – you can reach all on foot or for the walking-averse set, take a short tram ride. I recommend the former as the experience is just all the more worthwhile and you get to see the lovely sidestreets and locals going about their daily routine. And as I mentioned, it is very compact.

The city is divided into two main parts, each sitting on one bank of the river Vlatava – the Lesser Town or Mala Strana, where Prague Castle is located, and the Old Town or Stare Mesto, where the town square with the famous astronomical clock is. Linking the two sides of Prague is one of the most famous bridges in the world – Charles Bridge or Karluv Most. There are many other bridges linking the two, of course, but none of them quite reached the importance of the Charles Bridge, which was, until 1841, the only means of crossing the Vlatava. Sidenote: Most actually means bridge in the local language and I finally figured this out after looking at our map and seeing this label on all the bridges.

Commisioned by King Charles IV to replace the old Judith Bridge which collapsed during the flood in 1342, construction on the Charles Bridge began in 1357, with the king’s favourite architect Peter Parler overseeing the work. According to legend, egg yolks were used in the construction of the bridge and that King Charles himself laid the first stone at a specific time because of his strong belief in numerology and that this would render the bridge with more strength. Considering that the bridge is now 700 years old and has survived countless wars, revolts, and yes, floods, there might be some credence to those beliefs after all.

The bridge is more than half a kilometer long and entrance to it is marked by three towers – two on the Mala Strana side and one on the Stare Mesto side. The Old Town bridge, completed in 1380 and which serves as the entrance to the Stare Mesto, is a masterpiece of Gothic architecture with sculptures by Peter Parler adorning its facade. Climbing the 138 steps to the gallery allows you to have unobstructed views of the bridge from the top, as well as the Prague Castle on the other side of the Vlatava. Too bad though, that when we were there, we either get there too early or too late for the opening of the gate so I wasn’t able to climb up. 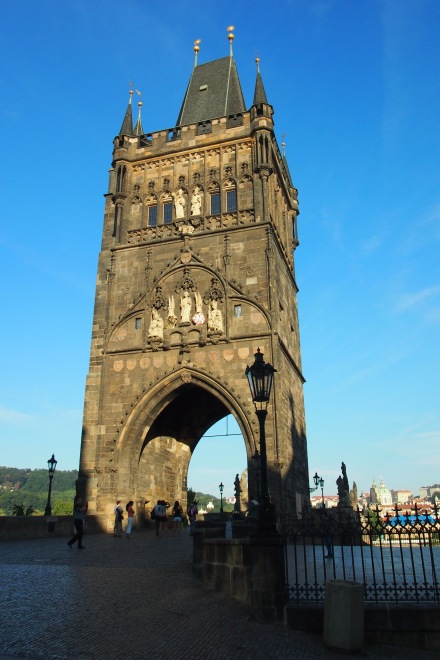 The Lesser Town Bridge, on the hand, serves as the entrance to the quieter side of Prague – the Mala Strana. It was built later than the Old Town Bridge, in the first half of the 15th century during King George’s rule. Visitors can likewise climb up the tower, this time for views of the Old Town from across the Vlatava.

If you look at the tower closely, you will notice that there is actually a smaller tower connected to it by a walkway – the Judith Tower, which is the only surviving part of the old Prague bridge.

Initially just a simple bridge with just a crucifix in the middle, baroque statues were placed during the 17th century, when such themes became prevalent. The 75 statues on the bridge are now all replicas – the original ones are now so badly damaged that they’ve been taken down and kept on display at the Lapidarium. 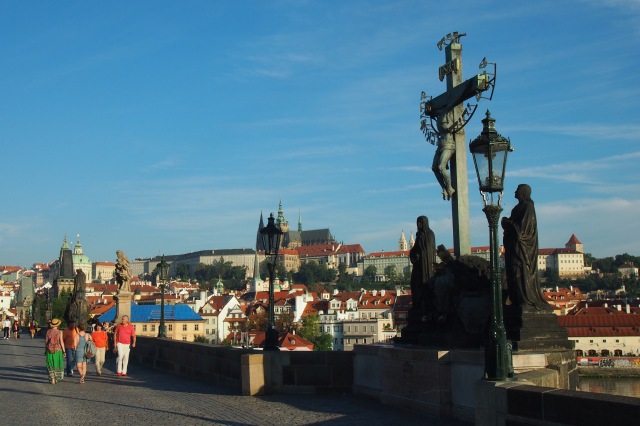 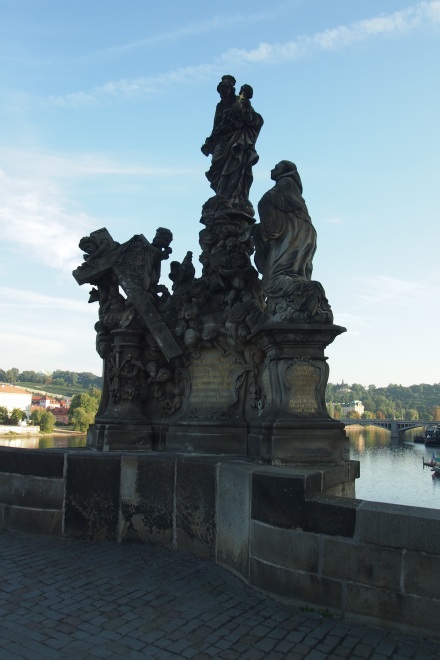 Both sides of the bridge are fascinating but the Mala Strana, an old marketplace which began its life in the 8th century (!), is less crowded and in my opinion less commercialized – there are various cafes and shops showcasing works by local artists as well as jewelry stores with oh-so-lovely pieces in silver and lovely blood-red garnet, which is the official national gem. And pretty cheap too! When I checked in some of our jewelry stores here in Manila, they were all ridiculously priced that I now wish I’d hoarded garnet jewelry during my trip.

Oh well, there is always a next time.

And I can’t get over how clean the entire city was. Usually, old towns such as this would reek of horse urine and the like but I was surprised to see water tanks regularly drizzling the cobblestoned streets with clean water.

We visited the Mala Strana quite a number of times – first was to go to the Prague Castle (more on that later), and several to visit the Church of Our Lady Victorious and the miraculous image of the Infant Jesus of Prague.

The Church of Our Lady Victorious, while seemingly austere on the outside, is the first Baroque church in Prague, built in 1613. It was originally called the Church of the Holy Trinity and was supposed to be used by the German Lutherans. It was given to the Carmelites in 1620 as a sign of gratitute for their victory in the Battle of the White Mountain, and the church was rebuilt and its orientation changed tot he form we see today.

The exact history of the statue is not known but its first appearance was in 1556, when the statue was brought from Spain to the Kingdom of Bohemia (of which the Czech Republic used to be part of) by Spanish princess Maria Manriquez de Lara y Mendoza upon her marriage to the Czech nobleman Vratislav. It is said that the statue was a gift from St. Terese of Avila to her mother; she later gave it to her own daughter Princess Polyxena, who in turn donated it to the Carmelite Friars in 1628.

The 19-inch statue is made of wax-coated wood with it lower part encased in silver; it is similar to other sculptures of the Infant Jesus brought by Spanish missionaries to their conquered lands – it resembles the Sto. Nino de Cebu, itself a venerated statue in the Philippines.

Various miracles have been attributed to the statue – most notably for saving the entire city from plague and invasions, when entire armies would inexplicably withdraw their armies after the city prayed in front of the alter of the infant Jesus.

There are many devotees to the Infant Jesus and there is a room off to the side of the alter where various presents from its devotees are showcased. Perhaps the most famous of this is the garment sewn by the Empress Maria Theresa.

I spied a number of presents from fellow Filipinos in the glass cabinets – indeed, I felt immense pride upon learning that the choir (we attended the Sunday mass at the church during our trip) is mostly composed of Pinoys. And there were many Pinoys attending the Holy Mass with us. 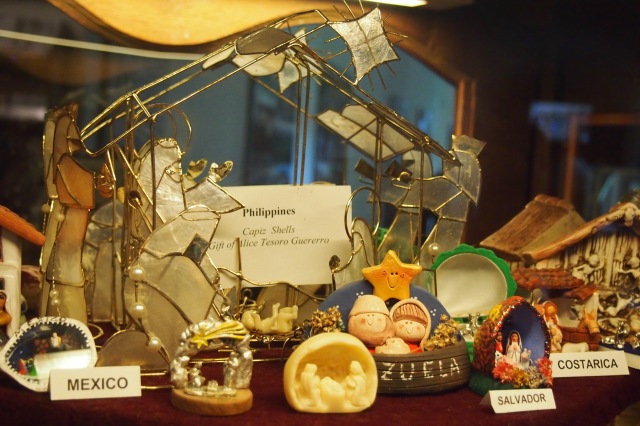 I am not really fond of religious statues (except for the rosary and the crucifix) but I bought a small Sto. Nino for our little home. I felt so blessed visiting this Church and quite touched that the Mass was well  attended.