Maybe it’s because of the frenetic phase of life I am currently in that I find myself thinking and reminiscing about my trip with friends to Amsterdam almost two years ago (my second in a span of a year). There’s just something about the place and the demeanor of the people that made me think what a laid back yet modern city it was.

Or maybe it was because it was the last leg of our 24-day long Eurotrip and we were, to be honest, literally tired from all the travelling and sight-seeing that we were just happy to experience the city like locals and not cram as many tourist spots as possible in our four nights in the city.

We actually realized how long our trip was when upon arriving in Amsterdam, we were greeted by cold gusts of wind – summer had turned into fall! It was so cold in fact, that we couldn’t venture more than a block away from our apartment.

First thing we did after resting? Buy new clothes! Our wardrobe consisted of shorts and summer dresses. We didn’t think we’d need thick jackets and scarves, and the like!

Fortunately for us, our apartment was midway between the touristy places and the grand plaza. So after buying all necessities, we headed off in the other direction to the Rijksmuseum and the Van Gogh Museum. I loved both museums and I guess, most other visitors do too, since they are the 1st and 2nd most visited museums in the Netherlands!

What makes the Rijksmuseum even more engaging is that you can download an app and type in the number of the artifact or artwork, and it will give you the description/background, as well as in what part of the museum you are in currently! Now, I am not one to hire tour guides and all because I prefer to roam around at my leisure, and I almost always do prior research so I can zero in on the ones I want to see. So if you’re like me, this app would be perfect for you.

As with other museums in Europe (or the world, for that matter), a lot of the impressive artworks deal with religious themes.

And what can I say aout the Van Gogh Museum? We spent a good three hours or so just looking at his works. I grew up listening to the song Vincent and had always been fascinated with him and his art. It was almost surreal to see in person The Potato Eaters, Bedroom in Arles, and The Yellow House.

Too bad that the Starry Night painting, which I’ve always wanted to see was not there (it’s part of the MoMA in NY’s permanent collection).

And too bad that I don’t have pictures to show you – as you may have read from my Prague posts, my camera conked out so I had to rely on my iphone. Which would have been fine had it not been a victim of one of those IOS upgrades that just didn’t work and had to be reformatted. Net result, I lost all that were in my phone, photos included (it’s not synched with any laptop since the hubby uses the macbook).

Anyway, at least I was able to save these photos! What would a trip to Amsterdam be without posing in front of that I Amsterdam sign! 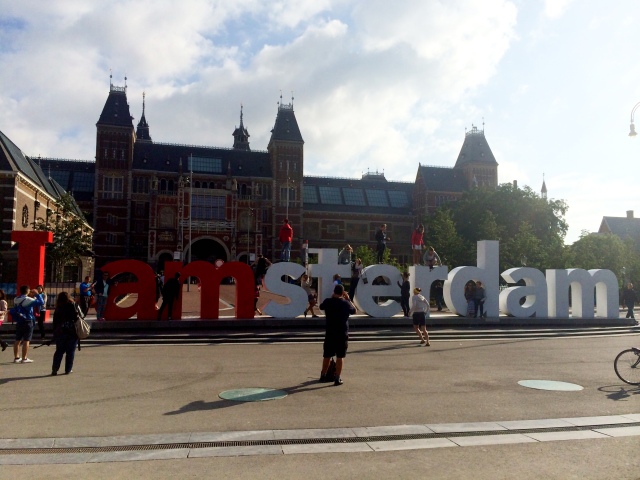 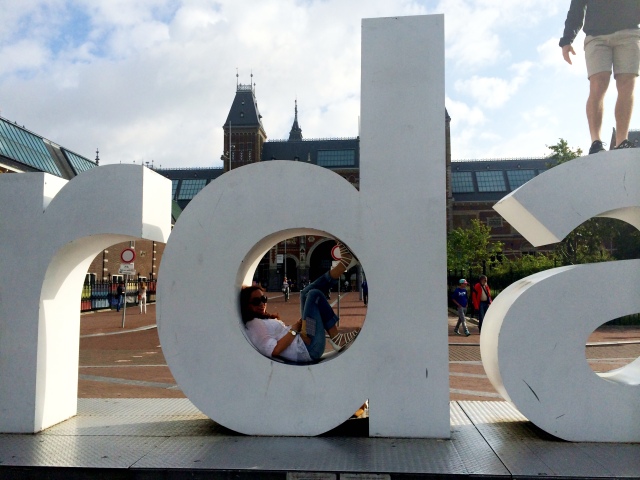 Since I’ve been to Amsterdam before, I had a pretty good idea of how to go around. My friends had been dying to see the red light district (for those of you who don’t know, prostitution and marijuana is legal here) and since it was just a few minutes walk from the Dam Square and the Royal Palace, I said, why not?

It was a downcast day and we had to take shelter for a good hour or so inside one of the shopping malls beside the palace (tip: they have luxury brands there but I got the impression that not too many people shop there, so they have all the hard to find colors), but the walk to the red-light district was nice as it was considerably cooler as well.

It was early afternoon when we got there so only a few establishments were open but we got what we came for – display windows with scantily clad (sometimes half-naked) women peddling their wares. I doubt if we would have had the stomach to see any of the live shows though.

Amsterdam, or the Netherlands for that matter, is built on land reclaimed from the sea so there were lots of canals and bridges connecting the streets. It’s very charming and picturesque – you’d be hard pressed to find a place that’s wasn’t photogenic.

We were so lazy in Amsterdam that we didn’t even try many restaurants (and for foodies like us, trying new restos is a must when traveling) – we found the nearest pub near our apartment, Cafe Berkhout, liked the food, and stuck with it the entire trip. We felt like locals sitting in what had become our usual table. In fact, we were there so often that we even figured out the shifting schedule of the servers! Hahaha!

Cafe Berkhout offers mainly burgers, fries and chips  which you chase down with beer. You can’t go wrong with their burgers which were so big my friend and I always had to share. And I was quite proud for trying the Kinkey bitter lemon which soon became one of our favorite drinks (along with red wine, of course). 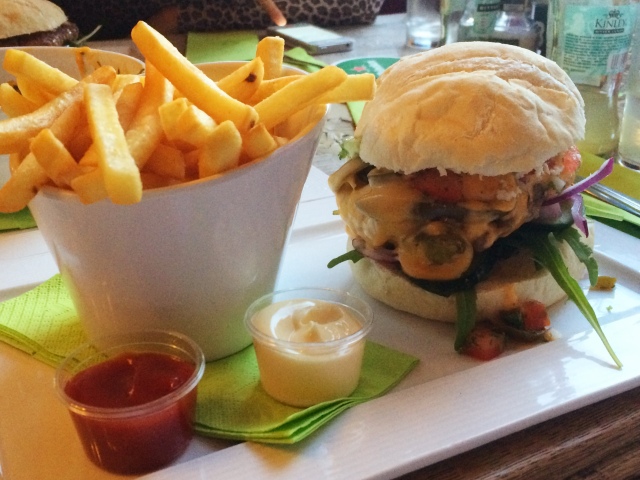 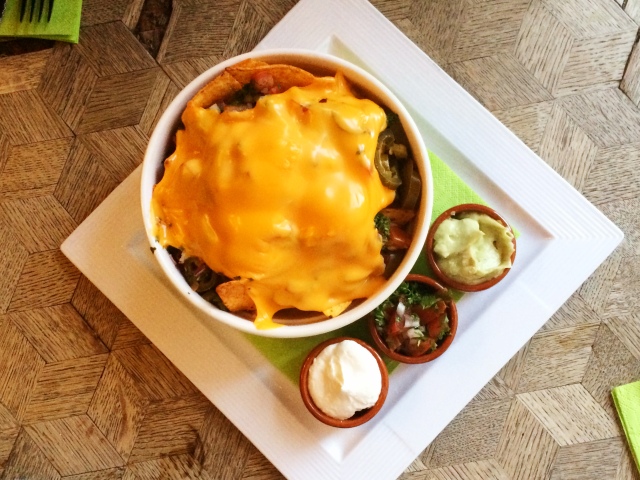 What contributed also to our memorable Amsterdam trip was our gorgeous apartment, which we found through Airbnb. To be honest, prior to this trip, I have never tried their services. It was more expensive than our other hotels and apartments (2nd only to our flat in Paris which was a stone’s throw from the Louvre) but we enjoyed our stay so much and our host, Maria, was so gracious. We stayed at the ground floor of her house which had two bedrooms, a dining and living room (complete with its well-stocked espresso machine), a full-service kitchen and even its own private garden overlooking the canals! 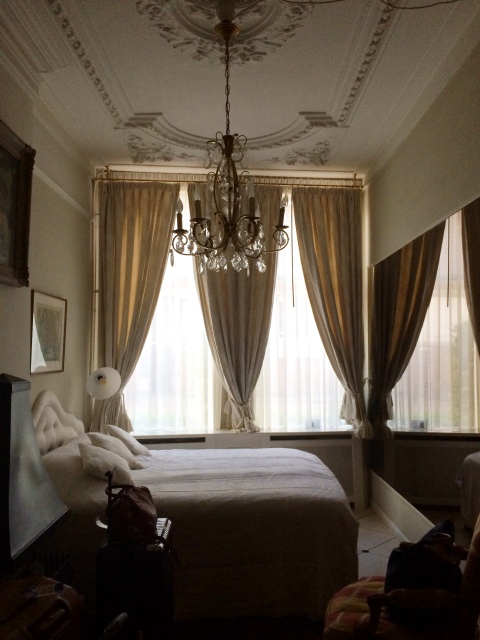 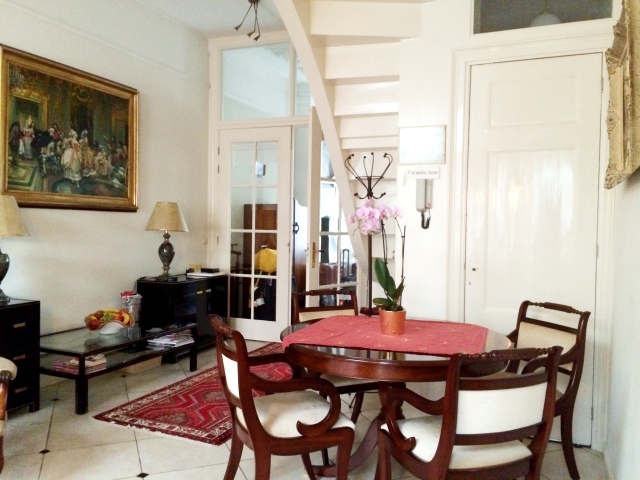 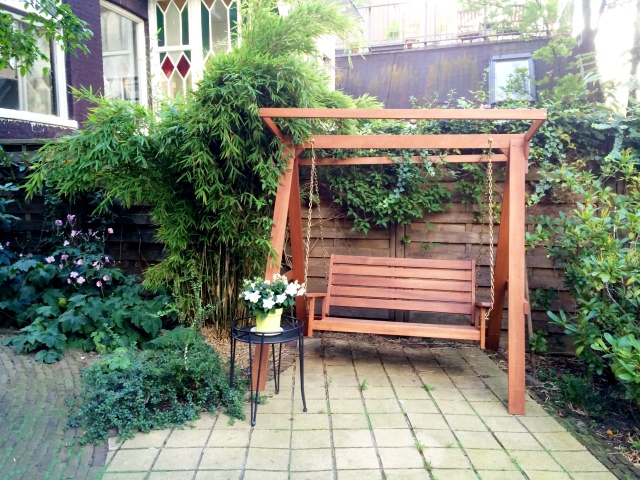 Too bad that it was raining almost the entire time that we didn’t get to have our planned picnic in the backyard; I did get to experience sleeping underneath the stars, and LIGHTNING, as the 2nd room near the canal had clear glass ceilings!